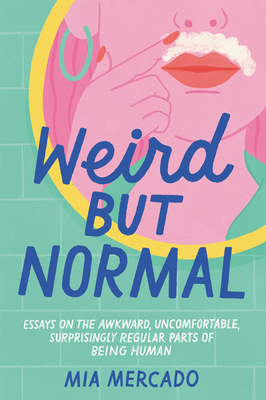 I am seriously surprised this book isn't getting way more love. It seems like maybe WEIRD BUT NORMAL just isn't reaching its target audience, which would probably consist of hip millennials who like BuzzFeed and consider Refinery29 "peak journalism." And before you come after me, I fully group myself in that category. Refinery29 is awesome, btw, and it's so easy to fall down that rabbit hole...

WEIRD BUT NORMAL is a collection of essays on womanhood and millennialhood by Mia Mercado, a woman who is half-Filipino, half-white, and yes, this is also a theme to her essays, as well. The first 3/4 of this book were an easy five for me but then it was like she was running out of the ideas towards the end, because some of the topics got a little weird. Most of the essays I loved-- like there's a really funny one about some of her usernames that she used when she was young in the early days of the internet that was so nostalgic, and I don't think I've vibed with anything an author said about the impostor syndrome you can get with depression like this since, like, Allie Brosh. I was like, Mia Mercado, you get me.

But then there would be weird essays. Like when she pretends to be a judge ruling a court case between her 2013 self getting bangs (her current self is the plaintiff, obviously). Or when she compares bringing home different types of satire to parental disappointment? And there was one where she was writing to her sister in a way that was really sweet but also felt way too personal-- not in a "yikes!" way but in the way that reading someone else's inside jokes holds literally no involvement for you, the outsider in this equation. Sometimes these little gags would work and I would laugh (like when she pretended to be her dog-- oh my God, comedy gold), but usually it just made me go, "Huh, what?"

Most of these essays, though, are high key relatable and I really, really enjoyed this book. The commentary on being biracial and or struggling with impostor syndrome or inadequacy as a woman? So good. I breezed through this in just under a day and it left me feeling pretty happy, kind of like I'd just made a new friend. You know how some memoirs just feel really personable and it's like you can hear that person talking to you in your ear, like she's your best girlfriend and you're chatting over wine? This book was like that.

You may have thought I was joking about BuzzFeed in the beginning, but I wasn't. That is the demographic this book was reaching for-- and if her agent/pub didn't reach out to BF in an attempt to get some press, they did the author a h u g e disservice. (Okay, I just checked and NOPE. #disservice)