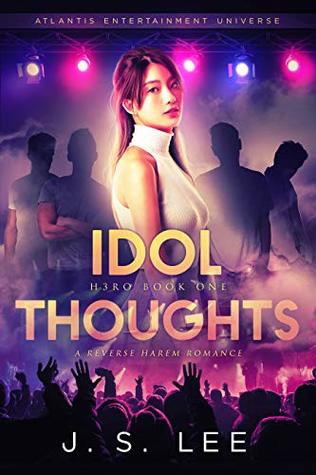 I'm kind of surprised this doesn't have more reviews given that (1) K-Pop is insanely popular and (2) it's one of the more decently written reverse-harems I've encountered in the Kindle Unlimited store. That said, this one just didn't work for me. I liked the premise a lot. The heroine is the illegitimate daughter of a major player in the Korean music industry and ends up over her head when he brings her in to take over the family business and she ends up basically being assigned as the manager of a problematic and scandalous boy band called H3RO on the verge of being disbanded. Her half-brother is out to get her and thwarting her by turns and all of the guys she's in charge of are incredibly attractive. It sounds like the recipe for drama and it is: just... not really the kind I was hoping for.

Sejin was such a wasted villain, in my opinion. I felt like the author really could have played up his involvement with the music industry and been more active about his attempts to thwart the revival of H3RO. I also felt like the meet-cutes with the boys felt very Wattpad-y in terms of execution. Like, this felt like a fic geared towards a very young audience, and while that is fine, the fact that the characters were so much older and there are some explicit scenes made me a bit confused about who the target audience for this book is. It's a bit too adult for most teens but it feels too YA for most adults, so I guess maybe it's meant to appeal to older teens/early 20s? The author also overuses the phrase "holy hell" to the point that it starts to feel like a tic. I feel like she could have dialed back the "holy hells" by about 75% because it's reaching Anastasia Steele "inner goddess" levels of wtfery.

Maybe this review is a bit harsh but my hopes for it were very high. Several of my friends really enjoyed this one but I noticed they seemed to be younger and more into K-Pop than I am.