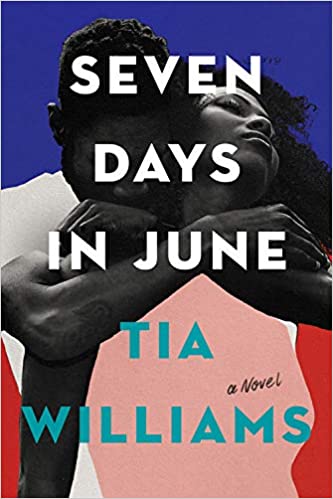 Ever read a book that delves into so much that you're kind of at a loss of how to review it because you want to talk about e v e r y t h i n g, so you know you're going to forget most of it? That's me with this book. Also-- this review is dedicated to my cat. I don't think I'd be getting these ARCs as fast as I am if she didn't like sitting on me so much, thereby keeping me trapped in place. Thanks, cat.

So, SEVEN DAYS IN JUNE. What a rush. It's a book about dealing with chronic pain (where chronic pain itself is not the central conflict), a celebration of Black excellence, a pretty excellent insight into what it's like being an author/writer (being one myself, I know), and a fantastic second-chance romance. I don't normally like second-chance romances, but I ate this up like it was ice cream on a silver spoon.

Eva is a single mom and the author of a wildly successful romance novel about a witch and a vampire (both PoCs). She also has intense migraines, the kinds that can cause blackouts, auras, and nausea. I know someone who has those kinds of migraines and when I told them about this book, they were SO excited, because disability and pain management just really aren't subjects you see dealt with much in fiction unless it's a memoir (#sobrave) or a work of lit-fic about suffering (#soinspired), but in a romance? #notsomuch #repmatters

Shane, on the other hand, is a literary fiction author (#irony) who has made a killing writing the types of books that book clubs love to read: slices of life about poverty and Black pain through the medium of a plucky and sad heroine that the public loves to root for. When they meet, quite by chance, at a literary event, everything comes crashing down because neither of them have forgotten the week they spent together when they were young. A week of intense hurt and comfort, pain, love, and betrayal.

First, let me just say that the flashback scenes were THE BEST. I would honestly read an entire book just about Shane and Eva as young adults because the passion they felt and the pain were both so real and the chemistry they had with each other was OFF. THE. CHARTS. I did not feel that their adult chapters quite reached that level, but I guess maybe it was because they had both grown up and grown wary as people and had to let down their respective guards. But I did think the past chapters were way more compelling and the author really captured what the early 2000s were like.

The present chapters were interesting in how they focused on both of their very different writing careers and the problems that accompanied them. I loved Eva's daughter, Audre, which was a nice surprise because I don't normally like kids in romance novels. But she made me laugh and acted exactly how you would expect a precocious teen to act. I also liked that this was a second-chance romance that didn't have a hero that acted like trash. Shane was SUCH A LOVE. I am obsessed with Shane, okay? Easily one of the most compelling male love interests I've read about in a while. #TeamShane

I wasn't sure what to rate this because there were things I LOVED and things I didn't love quite as much. I also don't really think I was adequately prepared for what this book would be like. I thought it would be one of those quirky romances that are kind of light-hearted and while this was that in parts, it was also quite dark and contains a number of content warnings for some pretty upsetting things. Reading it ended up being kind of like a rollercoaster with lots of ups and downs, and while that did work for me, it might confuse or put off some readers.

This was the perfect blend of sexy, romantic, humorous, and angsty, and I am definitely adding this author to my "authors to stalk" list because it was just that good.