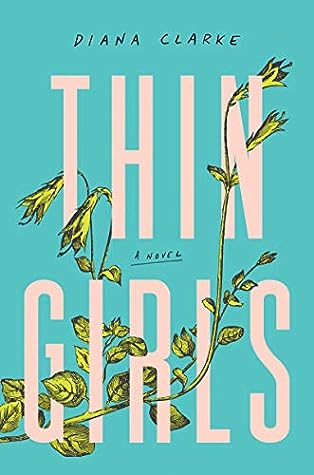 I bought THIN GIRLS a while ago but didn't read it until now because I wasn't really in the right "space" for something so dark and heavy. It's a really weighty story that delves into a number of really difficult subjects, everything from coming out, to eating disorders, to toxic family dynamics, to abusive relationships, to bullying. There's almost a fairytale-like quality to the writing, which is floaty and kind of dreamy. I don't think it's a style that is going to appeal to everyone but it worked for me and kind of reminded me of an adult-geared version of Laurie Halse Anderson's book, WINTERGIRLS.

Lily and Rose are twins-- identical twins, alike in every way, until one of them stops eating and one of them can't get enough. It's told in past and present. In the present, Lily is overweight and entering into an unhealthy relationship with a married man and Rose is in a rehab center trying to reestablish a healthy relationship with food. In the past, we follow the twins through high school, and see Lily's fall from grace as a popular girl and Rose struggling to suppress her emerging sexuality as she finds herself attracted to the Queen Bee, Jemima.

The "past" sections were much better than the present sections, in my opinion. There's a subplot with an influencer's weight loss products that ends up kind of being a distraction, adding too much to the plot, which already has so much to work with and focus on. The present sections are about girls in a household that, while not abusive, still has toxic dynamics and enabling behaviors that end up fostering some really maladaptive coping habits that Lily and Rose develop in an attempt to get some control over their lives. The past portions are also going to be the most triggering for people because the author lists out their weight at the beginning of each of these sections, with hard numbers, and it's my understanding that this can be particularly hard to see and read if you've struggled with an ED.

Overall, I liked this book a lot and thought the author handled her subject with respect as she told the story she had to tell. It was beautiful and disturbing, and even though it had its flaws, I would still recommend it to anyone who is a fan of literary fiction that focuses on women's problems, in the vein of of WHITE OLEANDER and the many attempts to copy it that followed in the late-2000s.