The Ghosts We Keep by Mason Deaver 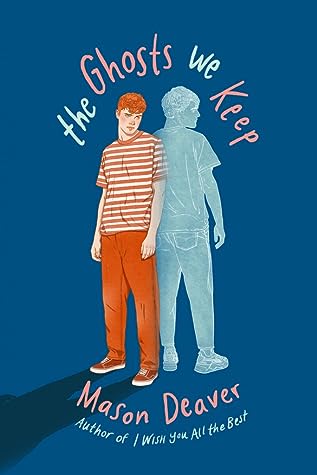 This was a really painful read and not always for the reasons I thought it would be. I knew about Mason Deaver from their debut novel, I WISH YOU ALL THE BEST, which I'm reading right now and quite enjoying. I liked this book, too, but not as much-- and that's partially because Liam, the protagonist, is a difficult character to like. Grief manifests in different ways, and for them, it's withdrawing away from friends and family and an intense anger that stems from helplessness. Which is totally understandable but not always easy to read.

Told in "before" and "after" chapters, we get to know Liam's late brother, Ethan, who seemed like a golden boy/star athlete/popular, but had problems of his own. Through Liam's eyes, we get to know more about him (Ethan) and his best friend Marcus, as Liam also struggles to deal with the fact that their two best friends don't really seem to want to do anything with them anymore now that they (Vanessa and Joel) are dating and they (Liam) are depressed. Apart from that, there really isn't a "plot": character development drives the story forward as Liam attempts to get closure and navigate their grief.

So there were a couple things I loved about this book. In some ways, it reminded me a lot of the book MY HEARTBEAT by Garret Freyman-Weyr, one of the first LGBT+ books I ever read as a teen (and I had the edition with the Keith Haring cover, too), only with a nonbinary protagonist instead of a female protagonist. This book is sadder, though, and it isn't really a love story like MY HEARTBEAT was, but that, to me, meant the focus was more on the message of the story here, which may have suited THE GHOSTS WE KEEP better. I also liked Liam's mom and dad a lot. The mom and dad in I WISH YOU ALL THE BEST are awful, so it was nice to see a book about a nonbinary kid with nice parents. And Marcus-- oh my God, the poor boy broke my heart about a thousand times over. I actually related to him a lot more than I did Liam, to the point where I found myself wishing that he was the narrator, but I think I might have ended up a total mess if he was, so maybe that's a blessing.

I could see this book getting mixed reviews when it comes out because Liam does lash out at everyone (sometimes when they have a right to, but sometimes in ways that seem unprovoked). The way they treated Marcus, in particularly, was pretty awful, and left me feeling kind of chilled, although I felt like their big confrontation with Vanessa and Joel was totally warranted. I guess this book is sort of a study on grief and the different forms it takes and how it informs and tests our relationships. There's also an "it's okay not to be okay" message I've been noticing more in books about YA mental health books. I liked THE GHOSTS WE KEEP but I didn't love it, basically, but it's definitely worth a read!