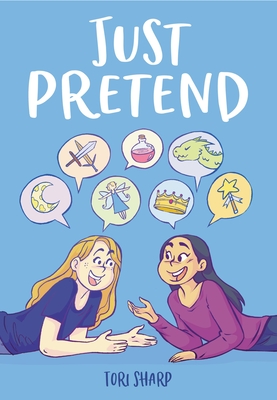 JUST PRETEND is Sharp's graphic-novel/memoir of growing up in the late 90s/early 2000s. Her parents are divorced and she's in middle school, struggling to deal with the tensions in her family, the changing landscape of her social group, and her desire to be a writer. I actually sympathized with her character a lot on the last note because I also used writing as a means of escape when I was young, only in my case, it was to kind of distance myself from some pretty intense bullying.

There's fun references that older readers will get, like Harvest Moon 64, and Cornelia Funke's Inkheart. Age-wise, though, this seems to be targeted at late-elementary school and middle school. Sometimes graphic-novels manage to be accessible to a wide rage of audiences but this one is geared very young, in my opinion, and it feels young, even though the book tackles some pretty tough subjects that will probably really appeal to its audience.

Overall, I liked it but didn't love it. I actually didn't realize it was a memoir until I got to the last page and found myself thinking, "Wow, that doesn't really offer a lot of closure." And then I saw the author's note and realized that it was based on the author's own life. It still ends pretty abruptly though, and doesn't really feel like a "neat" ending.