Read Riordan: The Lightning Thief / The Lost Hero / The Red Pyramid / The Sword of Summer / The Hidden Oracle by Rick Riordan 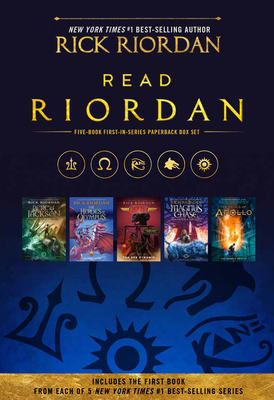 Okay, so I've read 4/5 of the books in this anthology and I've decided that these books are a little too young for me. Which isn't probably all that surprising to you given that I am a thirty-something reading books for tweens. But they were sent to me to review and all I can really do is read them and give my honest feedback with regard to my own perceptions of the characters and the storylines.

This box set contains the first book in each of Riordan's series to kind of give you a taste of his writing style, I guess. As far as I can tell (from the four of these five I've read), all of them basically start exactly the same way: snarky teen with one dead parent finds out that they are the chosen one to stop the world from being destroyed and also they're involved with the gods/descended by the gods/possessed by the gods/are a god. Literally all of them are exactly this.

I don't think this identical plot would be quite as fatiguing if you were actually reading the series in chronological order, but reading the "first" book in each "new" series and seeing the same recycled plot with different faces and different names is... well, it's a lot.

So, let's break it down. The best book in this collection, overall, is, by and far, Magnus Chase. I was honestly surprised I enjoyed that one as much as I did. Maybe because it kind of reminds me of K.A. Applegate's Everworld series, which is what I was obsessed with as a kid (I know, I told you-- I'm old). I thought it was really clever how Riordan incorporated some of those Norse myths into modern day society and the fast-paced plot made the incredibly long page count way less noticeable.

Kane Chronicles had the best magic system, but the kids were annoying. Especially Sadie, who is quite possibly the least British-sounding British person I've ever heard. I know it's tempting to turn the number of times she says "blokes" or "quite" into a drinking game, but don't. Just don't. Trust me.

The Trials of Apollo was the most annoying, period. If you've ever wondered what a teenage Lestat would be like, or find yourself wishing that Artemis Fowl was even more annoying and arrogant, you'll probably enjoy this book. Otherwise, stay far, far away. Forever.

Percy Jackson is the most well-known and probably the most overhyped, but it was fun. I read it years ago and liked it okay but it was definitely way too young for me. I feel like it's the most solidly middle grade of these books. Magnus and Trials both read as being slightly older in tone with Kane feeling more mixed because the boy lead is a teen and the girl lead is a lot younger, I believe.

What these books do well: honestly a really clever and fun way to teach mythology to kids. I know a bit about Egyptian, Greek, and Norse mythology so the in-jokes were genuinely clever and hilarious (especially the ones about Loki). I also really admire this author's attempts to incorporate positive diverse rep into his books. One of the Valkyries in Magnus wears a hijab and there's an elf who speaks with ASL. The kids in Kane Chronicles are interracial (half-Black) and the author makes a few attempts to kind of address some of the baggage that comes with that. The possible love interest of the male character is ethnically Egyptian. There's a lot of these moments and they seem effortless.

I just wish that they weren't quite so heavy on the slapstick, the winking at the audience, the needless (and endless) banter, and shallowly characterized. I actually had this problem with another middle grade series I used to like when I was young but didn't hold up over rereads: Alex Rider. I think whenever the banter starts to come at the cost of character development, I lose interest, because it's boring to read about people who always behave the way you expect them to and never fail to do the right thing.

But, again-- I'm not the target audience.

I was a bit torn on how to rate this book. Usually in box sets, I'll average my aggregate rating across all of the books in the series and then round up, but since I'm quitting four books in, I'm doing something I never do and just rounding up a half star since I know I'm not the target audience and anyone who has a young teen interested in fantasy (say, 11-14) will probably feel like these are a pretty safe bet. If you enjoy Artemis Fowl, Everworld, Animorphs, or Alex Rider, you will enjoy these books.