Break Her by B.G. Harlen 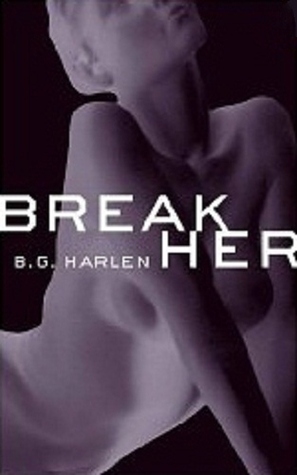 This was so dark and disturbing, but in the best way?? I'm not quite sure how to rate this because there were parts I loved and at its core, this is a five-star book for execution and story-telling. The "banter" went on too long and at some points, the story felt repetitive, but it never dragged me out of the plot and never kept me from desperately wanting to know what happened. I ended up devouring half of this book in a single sitting and went to bed wondering what would happen next. I finished the second half in another sitting and now that I'm done, all I can think to myself is, "Wow, she went there."

The heroine and the villain don't have names. They aren't really described physically and neither is their setting, the heroine's remote house. The details are spare. All we know is that the heroine wakes up to find a man in bed with her. A man who tells her that "they" have hired him to break her. And then the book is about him proceeding to do exactly that, with the heroine relying on her wiles and intelligence to fight him every step of the way. Which sounds like the plot of basically any other so-called "dark" fiction out there, but trust me: this one is different.

At times, this book is philosophical, even existential. I'm honestly amazed at how much character study was packed into this short work. Even though it's just two people in a room, it's tense and interesting. I felt so involved. Every time the author let something slip, I wanted to know more. By the time the book was over, it had become a hydra-headed monster of unanswered questions. I found myself thinking over everything I read, frustrated by the intentional lack of closure on so many levels. I want to say tons more, but it's best to go into the book cold. I will say that if you cannot read books about rape, do not read this book. Ditto if you don't like reading books with icky sex scenes. This is not a work for the squeamish. At times, I found myself incredibly disturbed and upset while reading this, but the author worked to handle her difficult subjects with gravitas and care. And the ending--

I'm not ready to accept that this author wrote only *ONE* book. I feel like it has to be a pen name. I hope she decides to share her other name (if she has one) because I would gladly read her other works.