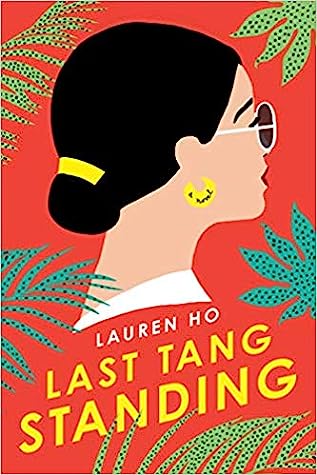 Usually I hate those X meets Y-type blurbs but CRAZY RICH ASIANS meets BRIDGET JONES is pretty on the mark for LAST TANG STANDING. LTS is about Andrea Tang, a lawyer who's gunning for partner and basically has it all made... except for a boyfriend. Painfully single and well into her 30s, she's officially the last woman in her family to be in a long-term relationship and man is she feeling the family pressure.

First, I want to say that even though I liked this book, at both 6% and 7% in I appeared to be missing a page. In the breaks, the next "page" started mid-sentence, so I was clearly missing text. That was annoying because this is a traditionally published book and it is not an ARC, so you expect a certain level of quality from books of this nature.

Moving on from Formatting 101, let's talk about the book itself. I really liked the fact that the heroine is an older millennial with a career. As fun as college stories are (and they are fun), I am an older millennial with A Career and I occasionally like reading about people like me. I also like that the heroine had relationships with several different men over the course of the novel while trying to figure herself out. Even though there's a lot of people who are like "THE HEROINE AND HERO MUST BE EACH OTHER'S ONE AND ONLY" I'm okay with them not being that way, necessarily, as long as it feels organic and isn't done for cheating drama (I HATE pointless cheating drama, FYI).

There's a large cast of characters, many of them tastelessly (or tastefully) rich. And this book is set in Singapore, so that's probably where the CRAZY RICH ASIANS comparison comes in. It's also written in epistolary journal format, like BRIDGET JONES, and like Bridget, the heroine is unlucky in love and very insecure and has some habits she would like to break but can't (in her case, it's drinking instead of smoking). Some reviewers thought the heroine was too bitter and cynical but her personality is actually a lot like mine (bitter, cynical, hard-working and ambitious), so I actually really related to her sense of humor. If you like that sort of acerbic writing style, you probably will, too.

I do agree with the nay-sayers that the book went on for a bit too long but I loved the love interest (he was the BEST) and the journey actually caused me some hardcore nerves as the will they/won't they vibes increased, so even though the execution was a little shaky, I still ended up liking this a lot.