The Bride of Montefalco by Kiriko Higashizato 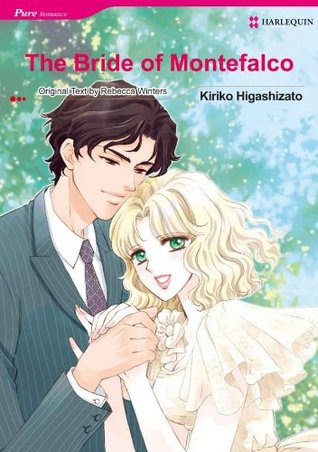 These Harlequin Presents books have influenced me so much as a writer because they taught me that there's nothing wrong with being trashy if it means telling your own story for fun and entertainment. So there's value in that, I think; reading doesn't have to serve some higher purpose as long as you're having a good time. These Harlequin manga are especially true to that sort of mindset, because they're like a further condensed "Reader's Digest" version of HP novels, done by Japanese mangaka and then translated back to English. Which is pretty nifty (and a handy tool for learning a foreign language; I sometimes read the Spanish ones to help myself improve because the panels make comprehension so much easier!).

Sadly, THE BRIDE OF MONTEFALCO was kind of a bust on all levels. I really didn't like the art. The panels in the e-reader were squished and hard to read. (They made them way too small.) The story was also pretty lame. Goody-goody heroine's cheating husband dies in a car crash with his mistress, who was the wife of a duke. As it turns out, when the heroine goes to Italy to confront the family and console them (ha-- what), she ends up being kidnapped by the duke's brother in law. Because it turns out the duke has Alzheimer's.

I just... wow. This was pretty much all the tropes I don't like in books. Extremely passive and naive heroine. Cheating. Children as props. Bland romance. Even the whole kidnapping angle is kind of silly and ridiculous. No, I can sadly say I didn't like this one much at all. What a shame.