Four Lost Cities: A Secret History of the Urban Age by Annalee Newitz 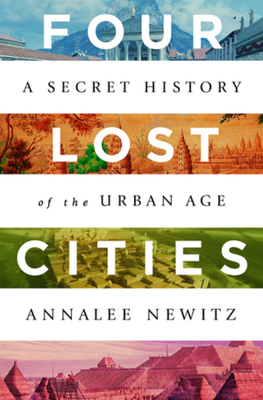 FOUR LOST CITIES is a really interesting concept. In this book, Annalee Newitz explores four "lost" cities that basically fell into disuse due to either environmental disaster or social change. To give this book a really personal and sensory narrative, they traveled to each of the four cities that they chose to write on: Çatalhöyük (in modern-day Turkey), Pompeii (the Roman getaway off the coast of modern-day Naples), Angkor in modern-day Cambodia (home to Angkor Wat), and Cahokia (a pre-Columbian Native American city dating back to early Medieval times).

I liked that the author made a point to include cities that were not exclusively European. I learned about Çatalhöyük in an art history class (primarily the bull's head motifs and building designs), but this was my first time learning about Cahokia and I liked how, in the cases of Cahokia and Angkor, the author challenged the Anglo-centric views of anthropologists that continue to bias research and education to this day. For example, the idea that Native Americans had no idea of land ownership, or that Native peoples are too naive to appreciate their own art or cultural artifacts. This is a point that I think some people don't feel comfortable discussing and I was really glad that the author pointed that out.

It's difficult to rate this book because while I enjoyed it and the writing style was exceptional, it wasn't all that entertaining-- in part, because in some of the chapters, it felt like the lack of knowledge about the ancient cities gave the writing a sort of nebulous uncertainty. I felt this most strongly in the chapter on Çatalhöyük, where the whole chapter basically continued to reiterate the point that archaeologists still aren't entirely sure what the people were like or what really caused the discontinued use of the city. Likewise, Cahokia remains a mystery in many regards, with no written records and very little surviving evidence to give us insight into what the daily life was like in such an old civilization.

The chapters on Pompeii and Angkor are the most vivid, perhaps because they are the most written about and, in the case of Pompeii, so well preserved. Pompeii, in particular, was particularly fascinating because of its salacious history and the way that the day to day life of the nobility and the working class was so richly portrayed. I would have read a whole book about Pompeii, I realized, because once the chapter ended, I felt like I hadn't gotten my fill-- and sadly, it was the only chapter I really felt that way about, because everything else just raised more questions and left me feeling frustrated for answers.

I do recommend FOUR LOST CITIES because I think it gives you an idea of what makes a society crumble (at least, the physical parts of it) and it really shines a light on some parts of history that you probably wouldn't learn about in your history classes (again, writing this from a U.S. lens). In my American history classes, I never learned about Cahokia, for example, even though it is literally a part of U.S. history and it goes back to the 1000s! That is so cool! I recommend reading the book in pieces and then taking a break after each chapter to let things sink in and give yourself time to look things up.