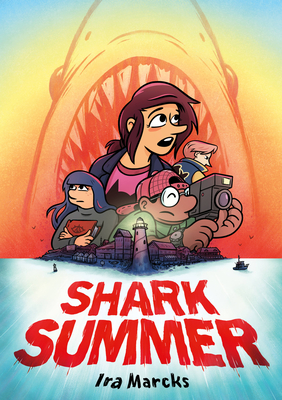 SHARK SUMMER is super cute. In some ways, it reminds me of an edgier kids' adventure movie, like Monster House (2006) or Tower of Terror (1997). After the heroine, Gayle, suffers an arm injury that gets her off the team, summer at Martha's Vineyard seems pretty boring. Her mother is working double-shifts to cover her medical expenses, which means that their dream of opening a boutique ice cream store are put on ice until they have the time and resources.

While moping around, Gayle meets two other kids: Elijah and Maddie. Elijah is the son of a journalist and Maddie's parents are historians. Both of them are outcasts like her, and the three of them unexpectedly end up working together on a youth film festival project in order to win the prize money being put up (as a publicity stunt for a Hollywood-filmed movie that's clearly inspired by Jaws that's also being filmed in Martha's Vineyard concurrently).

What you get with this book is some Scooby Doo-like chills-and-thrills, East Coast gothic vibes, some spooky history about cults and sharks, and an unexpected friendship. It was much darker than I was expecting, and may be too dark for really young readers, but for middle grade and up, I think this would be perfect. It really does remind me of some of those niche kids' horror movies I watched when I was young, and I think anyone who enjoyed Goosebumps or Eerie Indiana will love this. I'm always a huge fan of middle grade books that don't condescend to their young audiences and this is that.