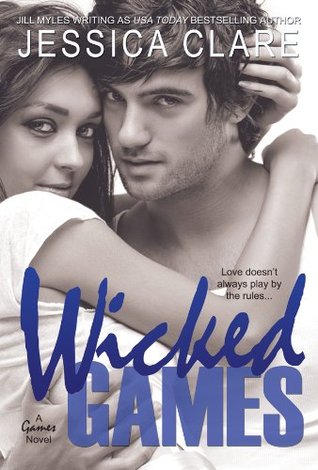 This weekend I was purging most of the new adult romances from my Kindle because I've come to terms with the fact that for the most part, it just isn't the genre for me. This book almost joined its fellows, but while reading the reviews, I noticed that Jessica Clare is actually a pseudonym for my beloved fantasy romance author, Jill Myles.

Well, obviously, that meant I had to read this book because it was written by my QUEEN. And to my pleasant surprise, WICKED GAMES was actually really, really fun! It's got a reality TV premise. Abby works for a media company as a book reviewer (heart eyes) but when one of the contestants for their television department bows out of a reality competition, Abby is forced into it with a lucrative book deal held over her head as a reward. Plus, she might win the two mil!

Dean is in it to win it and at first Abby can't stand him. So naturally, she ends up as his partner. Even though he's a jerk, she has to admit that he's got the physical parts of the competition nailed-- and she's incredibly smart, and can act as the brains of the operation. Their talents complement each other, and as they spend more time with each other, their mutual enmity seems to fade... but is it real? Or is it just all part of the game?

This was so much fun. It captures everything that makes reality TV such a guilty pleasure to watch. I liked the setting of the Cook Islands and I thought the author did a good job coming up with interesting challenges and drama to fuel the fire. The ending gave me so many feels and even though there's an HEA, it ended up feeling a little bittersweet. I didn't realize how invested I was in the couple until they really put my emotions through the wringer in the last act.

I'm definitely going to be checking out the other books in this series!