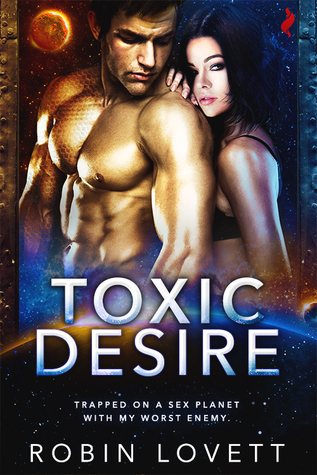 Mandatory disclaimer: Robin Lovett is my Twitter friend. That didn't bias my review, however, and I paid money for this book.

TOXIC DESIRE was a purely impulse buy for me. I grew up on Star Wars and Star Trek and used to read fanfic of both back in the day, which has given me a soft spot for trashy space smut, especially when decent world-building and strong female protagonists are involved.

Nemona is the female commander of her ship, although in the interest of being a gender-neutral democracy, everyone wears disguising suits and uses voice coders. When we first meet her, she's all suited up and opening fire on an enemy alien, the Ssedez, a powerful and dangerous warrior race that are enemy to the humans.

The Ssedez is named Oten and he is not happy with the humans either, and he decides to fling them both into the fires of a nearby red planet. Only, rather than being engulfed in flames, they find themselves in a steamy jungle that appears to inspire heat in more ways than one IF YOU CATCH MY DRIFT.

I'm going to be honest: this book is porn with plot. Most of the emphasis is on the sexual content, which is done REALLY well, so I didn't mind that at all, but I would have given it a higher rating if there were more storyline and more emotional connection since that's what I really crave in fiction. A three means I liked it, though, and there is SO MUCH to like about TOXIC DESIRE. It feels like a fun off-shoot episode of Star Trek-- like, I could totally see this happening as a filler episode on one of the shows (I'm thinking of that Voyager episode where they entered Warp 10 and became salamanders???).

Anyway, this was really great and I thought the physiology of the Ssedez was super cool. Gold retractable armor and ribbed-for-her-pleasure anatomy??? *wink* Also, all the thought that went into the descriptions of Fyrian (the planet) and the whole concept of a living, breathing aphrodisiac planet was PRETTY COOL (or should I say pretty hot?). I was in need of a light read to cleanse my palate between DNFs and this ended up being the perfect thing to break my book slump.

I'd definitely read more from this lady! If you love Star Trek: Voyager, I think you'll especially love this, because Nem(ona) is kind of like Janeway crossed with Samus Aran.