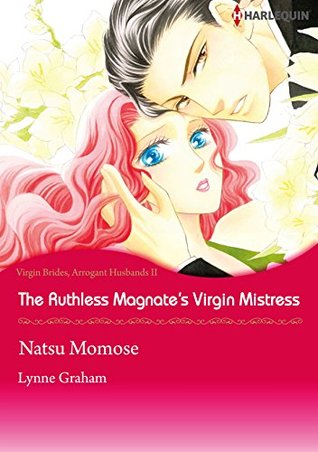 I'm not sure if I've ever read anything that was adapted by Natsu Momose before but I really like her art style, which is SO important for these manga adaptions because it can really make or break the story for me. THE RUTHLESS MAGNATE is about a girl named Abbey who ends up catching the eye of a Russian billionaire while filling in for a model at a fashion show for ~charity~.

Obviously he's super attracted to her and obviously she's so not interested, but he pursues despite her wedding ring, which turns out to be convenient because her husband is dead and also she's a virgin widow. A trope, I might add, I normally hate, but here it kind of works because her husband had... a secret.

I thought the story was decent and it was kind of exciting to see the couple from the previous book, THE GREEK TYCOON'S DISOBEDIENT BRIDE, make a comeback. I love little Easter eggs like that. The courtship was also great (not too rapey) and I liked that Nikolai turned out to be much kinder and more loving than the heroine initially thought he was.