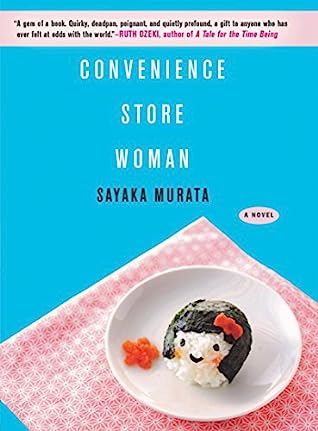 CONVENIENCE STORE WOMAN is a really interesting book that analyzes social norms from within the microcosm of a Japanese convenience store. Keiko has never been "normal" and probably has Asperger's. Most of the things that people do confuse her and she's learned to fit in by imitating others, but the strongest anchor in her life is her job as a convenience store clerk, where she has worked without advancement for eighteen years.

She finds her job at a convenience store comforting and has learned and internalized all the cues that make the job go more smoothly, whether it's watching a man pat his pocket to determine that he is going to pay with a card, to when certain items move fastest, to the importance of greeting and bowing with the appropriate level of deferential enthusiasm. But Keiko is no longer a fresh university graduate; she is now a single, childless woman in her thirties and people are far less tolerant of her unusual profession now than they were when she was young.

I liked the beginning of the book the best because I went to Japan three years ago and the convenience stores there really are so amazing, I actually really enjoyed hearing Keiko talk about her work. They aren't like the ones in the United States: they have things like fresh baked goods, sliced brie, and fresh ready-to-eat meals, like onigiri balls and big logs of tamago. Since I often couldn't eat out at the places we went to for lunch, I quickly learned to stock up at the konbini.

The book gets scathing and critical with the introduction of a misogynist who Keiko ends up getting involved with because she sees his hatred and frustration with women, in her weird, hyper-logical way, as being simpatico with her own desires: he's tired of being ignored and wants someone to take care of him. And Keiko thinks that having him in her life will ease the ceaseless questions about the absence of men in hers. It does-- horribly, even though he is jobless and has no prospects, people suddenly become much more tolerant and welcoming of her, and the chilling message seems to be that "typical dysfunctionality" is preferred to "atypical functionality" because what society does not understand, it eschews. It's a sad message but illustrated to great effect in this book.

CONVENIENCE STORE WOMAN is a quick read but not a particularly happy one. I don't think it's something you'd want to pick up if you're sad or already feeling frustrated with the world, but I did enjoy the opportunity it provided to revisit the convenience stores of Japan and I think it did a good job conveying the message it wanted to say without coming across as heavy-handed.