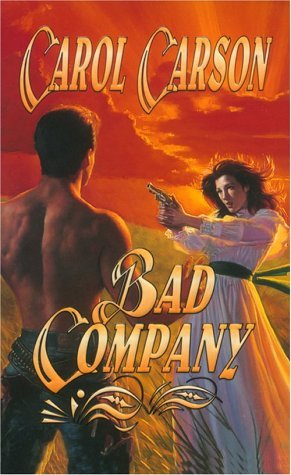 This book originally came out in 1998 but was recently rereleased in the Kindle store and right now it's FREE, so me and a whole bunch of friends (Nut Meg, Karen, Annalice, and a couple others who casually jumped in on the wagon because ~peer pressure~) read the book. The premise is pretty hilarious. Trixianna (that NAME) comes to a small Kansas town after an unpleasant misunderstanding with her sister over her brother-in-law. In the Kansas town, she bakes pies and just lives her best life. Unfortunately, she bears more than a passing resemblance to a certain red-haired bank robber named Mad Maggie, so the sheriff, Chance Magrane, thinks that she's actually a bank robber in disguise.

Well, he goes over to arrest her because due process and she shoots him in the arm because this is Kansas so why wouldn't a single woman living out west in the 19th century have a firearm? Anyway, he faints and when he wakes up, he's like TIME TO GO TO JAIL. But in the short time that she's been in town, Trixianna has endeared herself to everyone from the local madam to the cranky restaurateur to the eccentric drunkard claiming that he's a viscount (LOL) so pretty soon, Chance is peer-pressured into letting her out of the jail and into house arrest.

But not her own house, no. She's living in his.

Also, Chance is engaged to some fancy woman named Fanny but apparently Fanny is 100% okay with him having another woman living under his roof, even if this woman did shoot him. And that's not the end of it. By the end of the book, Trixianna also accidentally stabs him in the crotch with a knife (accident) gives him a case of hives with a cranberry pie (accident), nearly burns his house down (accident-- she was giving cooking lessons to the madams and the working girls), AND causes a little B&E when some of the local punks were hoping to get a glimpse of the T&A (hahaha). It's SO ridiculous and over the top and yet because of the decent writing and the author's own sense of comedic timing, it ends up being more fun than stupid and I read through this whole thing in a day.

I recently watched Goin' South (1978) with my family and while reading this book, I kept thinking of that movie because it has that same madcap adventure/mismatched couple sense of comedy, filled with just enough heart, romance, and danger to keep it from being too sappy or cheesy. I don't normally like Westerns because I'm a city girl at heart, so nothing about a bunch of dirt and cows and scruffy weeds really inspires nostalgia or longings in me, but books like this make me understand why people do. The descriptions of baked goods in this book were so decadent that they ought to be illegal, and it uses words like galoot and pandowdy (I didn't even know what a pandowdy was-- I had to look that up), and the sex scenes are surprisingly decent. If you like cheesy good fun, you'll like this.

Just keep in mind that since the sheriff is engaged to another woman, Trixianna is technically the OW.