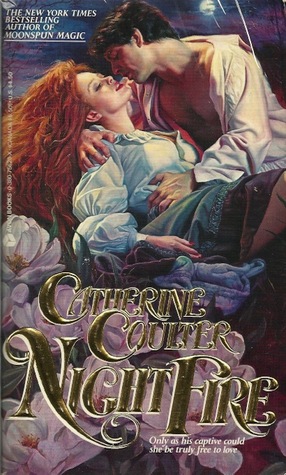 Side note: Catherine Coulter is one of those authors who rewrites her bodice-rippers to make them more PC. She's better at it than Fern Michaels, whose books seriously felt like they'd been gutted when I tried to read some of the "revised" editions *stares at WHITEFIRE* but I really don't like when authors do this because I feel like it just ends up muddying the waters. If you're going to write non-con, just write non-con and slap a content warning on there to warn people about it. Don't try to make the non-con consensual. It just... please. It makes it worse.

ANYWAY, this is the 1989 printing of this book, and as far as I can see, appears to exist intact (because it was still the 1980s, I guess, IDK). It opens up with some seriously bad stuff happening to the heroine. She married as a teen (gross) to an old man (gross) who likes to beat her (super gross) and because he's an impotent old bastard he thinks it would be a swell idea to get his actual bastard French son to impregnate her while he watches (super mega barf-in-the-back-of-your-mouth gross). The night before this family reunion is to take place, he chokes on his food and dies, freeing the heroine, Arielle.

Our hero, Burke, fell in love with the heroine when she was underage (GROSS) but then he went off to the Napoleonic wars or something (I think it was the Napoleonic wars, this is Regency fic), and when he comes back, he finds out that the teenager he was lusting after is now widowed (ahahaha GROSS), so he decides to pursue. First of all, GROSS. Second of all, your name is Burke so who are you? Third of all, HE HAS NO FINESSE about his courtship and basically just starts blackmailing her around just like her traitor brother Evan did when he sold her into marriage slavery to Beaty McChokesalot. So I already have zero sympathy for any male character in this book and they can all go jump off a cliffy ex machina for all I care (and I do not care-- at all).

Fourthly, this book was boring. Catherine Coulter is a very hit-or-miss author for me so I am not at all surprised. She is like Bertrice Small and Johanna Lindsey in that she is part of the Trifecta of Books I Don't Actually Admit to Reading in Public But Secretly Do So Don't Judge Me™ (ToBIDAAtRiPBSDSDJM™). I like some of her books in a guilty pleasure way-- like DEVIL'S EMBRACE, WYNDHAM LEGACY, and THE COUNTESS (an old skool Gothic, which is my favorite thing I've read of hers so far, 10/10 recommend). This one was a miss.