Crushing It by Lorelei Parker 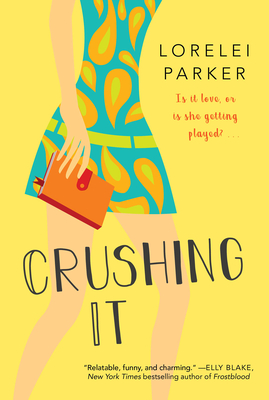 Ever since I heard about CRUSHING IT, I was dying to read it. I love reading romance novels about heroines in STEM fields and this one-- about a female game dev struggling with anxiety-- really spoke to me, as someone who also has anxiety and loves to play games. Late night Mario Kart tourneys? OH YES.

Sierra is the co-founder of a video game company and desperately wants to go to a German convention to promote the game that she helped build. But she has a terrible anxiety about public speaking due to a traumatic past incident that she needs to get over. The trick? She decides to participate in a contest at a local bar where people get up and read their cringiest stories to get a free drink and a chance to move forward for the $1000 cash prize.

While at the bar, she meets all these people from high school and college, including a past flame and an ex-geek who had a major glow-up. Sierra has terrible self-esteem issues and is used to settling for less, so it's difficult for her to tell whether or not she's really interested in someone or if it's just a physical thing. Which guy will make her feel good about herself for real? And is it really love?

I liked this book a lot. Actually, 2021 has been a slew of disappointments for me so far so it's honestly really exciting for me to find something that exceeds the three-star mark. But I just couldn't help it! All the geeky references and late-night Mario Kart races had me feeling so nostalgic in the best way. It's so hard to find geeky romances that REALLY get the tone right but this one checked all the boxes. I also loved the bits about Sierra at work, and how much sweat and hours she needed to put in to succeed, despite being passionate about what she did. It really added a lot to the story. I couldn't refrain from posting a ton of updates about my feelings on the characters and everything they did.

The only things I didn't like about this book were the sex scenes and the big misunderstanding. And honestly? The big misunderstanding had a purpose and was handled pretty maturely. But the phrase "pulled me to him like a tractor beam" and a bunch of other weird lines just didn't really do it for me. I think it was because the book was trying to strike a funny tone and I just don't usually like humor blended with the sex. But those were the only peeves I had with this book, which ended up being a stand-out in the nerdy romance genre. If you love games, or work in tech, you'll love this.