Somewhere Between Bitter and Sweet by Laekan Zea Kemp 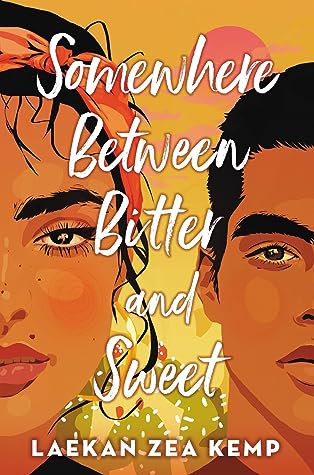 SOMEWHERE BETWEEN BITTER AND SWEET is a tough book to rate and I waffled between three and four stars because there were some things I really liked and some things that I didn't like quite as much. (For the record, three star reviews are the hardest to write because how do you say "yeah, I liked it, but I didn't REALLY like it and here's why?") This is the story of two Latinx teens with very different problems, who come together because of food-- and oh my God, the food descriptions are one of the best things about this book, because food is one of those things that sparks joy and brings people together and the author perfectly captured the emotional experience of eating something that your parents taught you how to make, and watching your loved ones consume something that you prepared with love.

Pen, the heroine, wants to work in the restaurant business. She doesn't want to go to college. Some people might not like this but I actually did because college isn't necessarily a path for everyone, and sometimes it's better to go to a school to study the trades, and I think it's nice for kids to see rep where other paths are explored.

Xander, the hero, is an undocumented immigrant who is searching for his father, and he's currently living with his grandfather while also lying low. He meets Pen when he's hired to work at a restaurant, cash under the table. They end up becoming friends and then, maybe, something more? Guess you'll have to read to find out. (And you should.)

I liked how the struggles of each character were represented although, like another reviewer, I was a little surprised that Pen could afford to live on her own on a fast food salary in a nice-ish apartment. I thought this was set in Texas(???) and from what I understand, Texas real estate is almost as pricey as California, so I wasn't sure if this would be feasible. It certainly wouldn't be here (in California). There were also a LOT of plot strings and it felt like a lot of them were resolved pretty hastily in the last act, and I think part of that might have been because of the time spent on developing the romance (which didn't really work-- their connection felt forced to me, you might disagree). I also felt like the subjects of depression and (CONTENT WARNING: self-harm) were pretty glossed over, which surprised me because this was compared to the book I AM NOT YOUR PERFECT MEXICAN DAUGHTER, and even though this explores the same themes of how depression can manifest as anger (something that REALLY isn't talked about enough), I didn't feel like that comparison was very fair to either book because this book didn't feel quite as developed in terms of fleshing out characters. (IANYPM is one of my favorite young adult books, so I may be biased.)

BETWEEN BITTER AND SWEET is definitely a YA for older teens because of its focus on what happens after school and also because of some pretty grim content, including an evil loan shark type character who is very terrible and some scenes of police discrimination. Nothing is over the top and everything is handled with care, but I think it will be intense reading for some (even though it serves a purpose). At the end of the day, this is a story about making mistakes, forgiving family for being imperfect, and how the things that can make a community vulnerable can also make it strong in times of need. And also, of course, FOOD.

I would definitely read more from this author. (Also, the author's note at the end was very sweet. Read it.)