A Most Suitable Wife by Chizuko Beppu 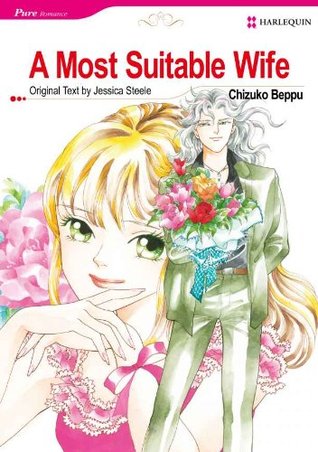 If you're new to me and to my reviews, you might not know that I'm kind of obsessed with Harlequin manga and every time HQ has a sale on these, I snap them all up like hotcakes, because they combine my two great loves in this world: shoujo manga and trashy romance. I guess this was how a lot of Western romances were packaged in Japan but they ended up coming over here and becoming popular in the West, kind of like plugging in something into Google translate and then translating that translation back into the parent language.

A MOST SUITABLE WIFE is a light-hearted story about a woman seeking a roommate to keep her nice apartment after her roommate leaves. She's shocked when her applicant is a man claiming to be an artist. She's even more shocked at how aloof and rude he is. Not that she has much time to think about it: her money-grubbing mother is draining her finances to keep up her elaborate lifestyle while also pressuring her younger brother to drop out of college so she can siphon his money as well. What a horrible woman LOL.

There isn't too much to say about this one except that, obviously, there's more to the artist guy than meets the eye, and the heroine isn't who he expected at first, either. Despite the use of jealousy to further the plotline and a series of misunderstandings, I didn't mind this romance much and I thought the ending was sweet and satisfying (although I wish her mother had gotten her comeuppance-- she was so awful).