Awaken, My Love by Robin Schone 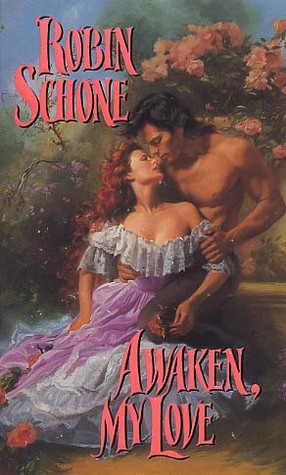 Robin Schone is touted as one of the better erotic historical romance authors around and I've been wanting to check out some of her works for a while. When AWAKEN, MY LOVE showed up in Kindle Unlimited last month, I eagerly jumped on the chance to read it. It's a bit like an English version of OUTLANDER in some ways, only with body-swapping. Elaine is a normal thirty-something woman from the late twentieth century (e.g. the 90s), and one day she awakens (ha-- title) to find herself in the body of a twenty-one-year old Victorian woman who has just been deflowered by her husband.

At first, I REALLY liked this book a lot and thought it would be three- or even four-stars worthy. The author touches upon all of those unpleasant historical details that are usually glossed over: body hair, what happens when you get your period, body odor, lack of dental care (she tries to brush her teeth with lye soap-- gross), the cold in all the rooms, and just all of these other details that spoke of research and really added an air of gritty realism to the story that I really appreciated.

Where the book begins to fall apart are the sex scenes. Charles, the hero, is a chronic mansplainer who has to explain sex to the heroine all the time. What makes it worse is that, since he was stationed in India and apparently developed a hard-on there, he CONSTANTLY refers to Elaine/Morrigan's vagina as her "yoni," has her look at Indian pornography (because of course he does), and keeps talking about "love juice," "dew of ecstasy" and power centers on the body responsible for sexual desire (I think they're chakras-- not sure though). Paired with choice descriptors like sucking on someone's earlobe as if it's a nipple, referring to a clitoris as a pomegranate, and numerous passages where furniture and clothing end up more soaked than the "splash zones" at a water park, and it all began to feel, well.

But apart from the sex scenes, I was enjoying watching Elaine try to navigate Morrigan's body. I feel like her dysmorphia and her confusion were pretty well done (she's so afraid of using the wrong accent in the beginning of the book that she pretends to be mute). But all of that changes when things get really, really dark. Like, unexpectedly dark. The cover and the first 60% of the story really don't prepare you for how dark this book is going to get, and I'm going to tag it as a spoiler because it does have the potential to ruin the book but I think people should know what they are getting into.

So that was pretty awful, and Elaine, living inside Morrigan's body, is horrified. As one would be. She also feels a lot of mounting guilt about her growing attractions to Charles because 1) she's not in her body and 2) she's married to another man in the 20th century (although they don't have kids). Well, then the story takes another dark turn. It turns out Morrigan swapped with her body and hated it-- hated Elaine's husband, Matthew (which is fair-- it turns out he's awful: he doesn't think women should masturbate and he doesn't like that Elaine is overweight), hated Elaine's body (bitch), and when she tells Matthew that she's actually a Victorian lady, he slaps her in a mental health clinic, no questions asked.

Well, it turns out that Morrigan actually IS crazy and after having sex with one of the staff to persuade him to let her out, Morrigan goes to an electrical train track and grabs the third bar to kill herself, thus destroying what used to be Elaine's body. Now she's possessing the body of someone in the 19th century, leaving Elaine sick notes, and also apparently she's a druid who can do magic, which was how this body swap happened in the first place. Well, it turns out the body she possessed was her rapey uncle's and that whole scene is just... oh my God. So wrong. So gross. So utterly WTF.

I'm giving this book three stars because I loved the first half of the book and the last quarter of it is as utterly insane as some of the most off-the-wall bodice-rippers I've read. But I'm not sure that two such different book styles really gel well, and I didn't like how sleazy Charles was with his culturally appropriative sex talk, even though this book was written in the 90s and he's a Victorian codger, so I guess sexism is something I probably should have expected as being par for the course.

Very strange book with some very strange themes. I kind of can't help but admire that.