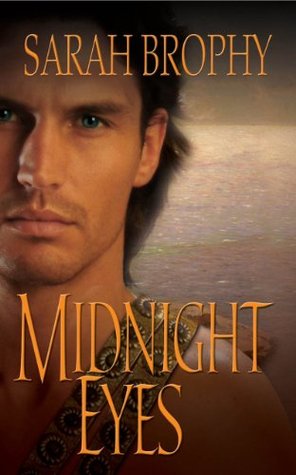 I bought MIDNIGHT EYES purely on impulse because it was pretty inexpensive in the Kindle Store and one of my hobbies is buying and reading half-forgotten romance novels that are 10+ years old because it's fun finding a book that nobody else has heard of and getting people as excited about it as I am, case in point: THIS BOOK. Oh my gosh, this book. It gave me all the sighs, all the feelings, all the nail-biteys. You know a book is good when you're reaching the high-point of the dramatic tension and can't stop click-click-clicking away.

Medieval romances are something that I love in theory but often find myself disliking in execution because the material either isn't handled well or the characters are flat and dimensionless. Neither is the case in this book. The heroine, Imogen, is known throughout the land as "Lady Deformed" after a beating from her abusive brother left her blinded. When he marries her to a hardened warrior of the king's, it seems like another cruel joke: putting her at the mercy of a man who will use her ill. But Robert is anything but cruel. He has an old man named Matthew as his squire and treats all of his men well, and honor means everything to him, so before even laying eyes on her, he's already putting an end to the cruel nicknames, saying that an insult to her is an insult to him.

And then he sees her and... well, obviously she's pretty because of course.

But a lifetime of abuse has left its toll on Imogen and being unable to see and abandoned in a place filled with shadows and bad memories has left her feeling angry and defensive. I could see some reviewers annoyed by the repeated mentions of Imogen's beauty but she never really felt like a Mary Sue to me because she had so much damage and it soon became pretty clear that Robert was interested in her in a way that went beyond the surface. So MIDNIGHT EYES ends up being a story of a slow-burn love between a man who is afraid of being vulnerable and a woman who is afraid of being ill-used and the best part of this book is their beautiful love story of intimacy and trust, replete with incredibly well-written sex scenes that add to, rather than detract from, their bond.

I think the plot line with Imogen's brother is going to be triggering for some but for the most part, much of it is alluded to rather than explicitly written out. Most of the focus is on the main couple and I loved Robert, who is one of the best representations of the caring alpha hero that I've encountered in the wild in a while. My only complaints were that the rescue mission in the last quarter lasted way too long and having the hero named Robert and the brother named Roger was a bit confusing. If I were the editor, I would have advised against having two main characters being named so similarly.

Honestly, this is just such a great book and one of the better medieval romances I've ever read. I wish the companion book about Gareth wasn't out of print because after reading this one, I'm desperate to know his story, too. Sigh.