Fair is the Rose by Meagan McKinney 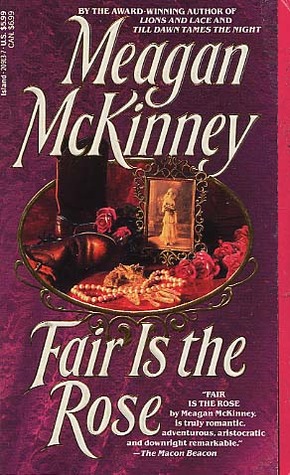 Meagan McKinney is one of my FAVORITE authors but her books can really be hit or miss. WHEN ANGELS FALL and LIONS AND LACE are two of my favorite romances of all time, but THE GROUND SHE WALKS UPON made me angry because it was bad, and TIL DAWN TAMES THE NIGHT made me even angrier because it was bad and it was so close to being good. FAIR IS THE ROSE had big boots to fill right out of the gate because it's the "sequel" to LIONS AND LACE, featuring the other Van Allen sister, Christal.

First, LIONS AND LACE this is not. That was more of a straight-up society historical novel, done in the usual mode. This feels like a regurgitated bodice-ripper from Ye Olde West, only with 90% less bodice-ripping. It starts out with a train robbery and the heroine gets kidnapped by a gang of evil criminals, which is co-led by two men, one of which is the hero, Cain. Only, it turns out that he isn't actually what he seems and traitorous bodies, et al.

I liked the heroine in the first book a lot better because she had backbone and grit. Christal was such a chore to read about in contrast. All she did was whine and talk about how she was too good to lower herself, no matter how dire her circumstances got. It started to feel more like idiocy than honor... especially when she flees to a BROTHEL. I'm sorry, it's called a saloon in the text, but everyone knows what it is, including the heroine, and she gets all high and mighty about that too, and the sanctimoniousness just drips off the pages lol. I mean, GIRL.

The first half of the book is a chore to read but I skimmed because I thought the hero was hot and the sexual tension was good. The last half of the book almost makes up for it and is more on par with the quality I was expecting. The sex scenes were great... except for a scene in which something is described as being "torn like a bedsheet" and the questionable choice to describe the hero's eyes as "Confederate gray." I was happy to see a cameo of Trevor and Alana from the previous book and there was a pretty dark showdown with the villain that made me happy although WHOOOPS, ACCIDENTAL RACISM.

Overall, I did like this book but only to hardcore fans of McKinney like me who are just here for the smut and are heavy handed with the cray-cray sauce.

Don't forget to check out Heather's review of this book. She buddy-read it with me!