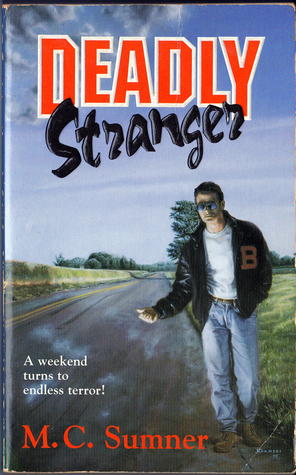 A while ago, I was doing a fun challenge where I was snapping up all the republished 80s and 90s YA and middle grade novels I could find on KU (there are a surprising amount of them) and reviewing all of the ones that piqued my fancy. Many of them were Point Horror, since those books, along with manga, were probably the biggest influence on my as an author (which you will probably immediately recognize if you're familiar with my work-- pulp horror meets OTT K-dramatics).

DEADLY STRANGER was actually really surprising in a fun way for several reasons. First, it's edgier than I was expecting for a middle grade title published in the early 90s, with plenty of allusions to sexual content, some pretty graphic violence, and casual mentions of drinking. Also, the two heroines are literally sneaking away from their parents to go on a ski trip without telling anyone, so there's that.

Shenanigans ensue when they pick up a hot guy who looks like a movie star from his totaled car. Only-- oops, it turns out he's a rapey bad man and he whips out a gun and pulls the ol' "now drive," so they're stuck with him and whatever his sinister plans are. And they are SINISTER.

Because I was a little trash can before I grew up and became a big, mature dumpster, I could totally see young me writing fanfic about the hot kidnapper guy because HOW DO YOU THINK I GOT STARTED ON THIS PATH TO TRASHDOM???? Hot guys = no questions asked. God, I was dumb. I mean, I still am, but at least now I know it. But the fact that he is hot adds a nice bit of tension to all of the gross horror that is the villain of this book WHO, I might add, is one of the most terrifying Point Horror villains that I have encountered in ages. Bravo.

Also, the two girls, Kelly and Lauren, are both very smart. Lauren's the pretty one and Kelly's the cynical DUFF, but they're actually REALLY ingenious in how they try to outsmart the killer. The fact that both of these realistic teenage characters were written by an older man just makes me really happy, because we often see examples of dudes writing young women badly-- here is an example of it being done well. The note in the ceiling was ingenious. Also the ending? *chef's kiss* You just know that Kelly is going to be the last girl standing in a horror movie. She's that fucking smart.

I liked this a lot and the only reason it isn't getting a higher rating is because the beginning took a while to get moving and the ending began to drag. Good stuff.