To Tempt a Scotsman by Victoria Dahl 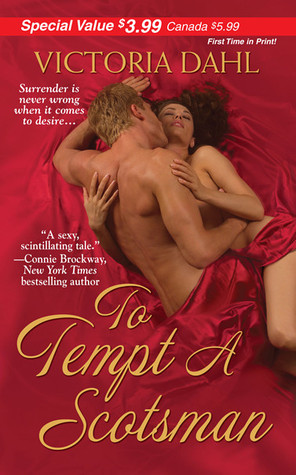 TO TEMPT A SCOTSMAN is living proof that when I give a book the three-star treatment, it isn't meant to be a dig. Victoria Dahl is an incredible talent in the historical romance genre. Her books are always so emotionally intense and have incredibly steamy scenes (much more so than you would expect). This is apparently her first in the series, which I read out of order, and so far it's the weakest. I love jealous alpha heroes, but Collin's behavior in this one verges on abusive and it's hard to read at times, even though it makes sense given the historical context for the book and his own sordid history as an illegitimate son.

The premise is this: Alex is the spoiled youngest child of a duke, and used to testing her boundaries. She wears breeches and is a bit of a tomboy, and she likes to mess around with boys. Unfortunately, she went a bit too far and was caught by one of her love interests while spending time with another (and his hand was up her skirt). They had a duel over her honor and one of them was shot and Alex was solidly ruined.

Now the half-brother of the departed love interest has come to seek his revenge against the fallen woman who was responsible for the death of his family-- only he's shocked by her naivete, and that she doesn't seem like the cold ruiner of men that he expected, given her reputation. After hating her on sight, he quickly ends up falling for her instead, and one sordid assignation turns into marriage due to ~unforeseen events~.

I liked this book a lot but it took forEVER to get moving. The beginning was very slow and Alex's character was all over the place. I don't think the author could figure out whether she wanted her to be naive, bitter, jaded, or sheltered, and so she settled for an odd blend of all four traits which don't really mesh. Once the story got off the ground, it was REALLY good. The last half was twice as good as the first and I thought the villain was properly terrible. (The third book also had a really great villain.)

If you like steamy historical romances with unusual characters and good villains, you'll love Dahl.