Tim Kaine Is Your Nice Dad: a work of dad fiction by Sara Benincasa 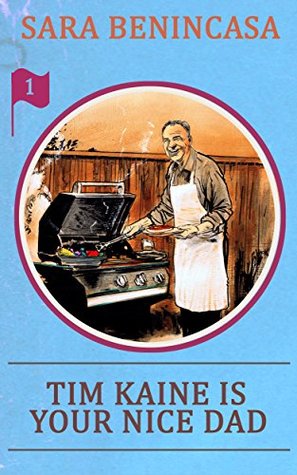 So let me preface this by saying that I voted for Clinton and Kaine in the 2016 election, so unlike some of the people who probably rated this low because they are Trump-lovin' trolls (there's a squad of them that rove around here, one-starring every book that dares stray even one iota to the left), I am giving this a low-rating because I just... don't get it?

This reads like something that was scribbled out in a single afternoon, and maybe it was. I see that the proceeds for its sale are supposed to go to charity, so maybe it's just a fun thing the author decided to do to earn money for charity. I can understand that. I just wish it was GOOD. I got this for free with Kindle Unlimited, but if I'd paid money for it, I'd be disappointed. It just... I don't think it was good and the sea of five-star ratings bewilders me.

And I know she can write, because I LOVED her book, REAL ARTISTS HAVE DAY JOBS.

Rounding up maybe one quarter of a star since the picture of young Tim Kaine is actually quite dreamy.