Seized by Love by Susan Johnson 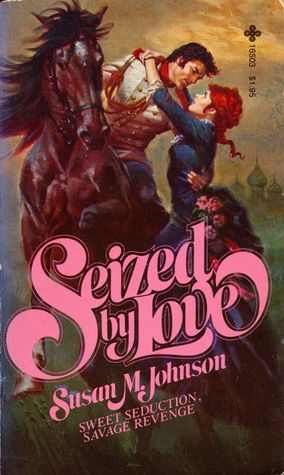 How do I even review this? God, I loved it so much-- from the very beginning of the book, I knew this was probably going to be a five star read. Prince Kuzan is a Russian playboy prince whose exploits are as inexhaustible as they are notorious. He's such a womanizer that he's grown jaded and when his friends decide to place a bet on whether he can seduce the unseduceable woman, he unthinkingly takes the challenge.

Alisa Forseus was married at sixteen to a man old enough to be her grandfather. As if that weren't enough to end the romance of a young woman's dreams, he's also abusive and keeps her a prisoner in her own home. Her backstory was incredibly sad, and when she meets the hero, she's off on one of the rare exploits permitted to her: painting watercolors by the river.

Since this is a romance, you can obviously guess what happens with the bet. Hilariously, though, Prince Kuzan ends up enamored with Alisa, and ends up becoming my favorite kind of hero: an unapologetic jerk of the first order, traversing the line between alpha and gamma, because even though he's controlling AF, he's also incredibly conniving and sneaky, and has a lot of polish and charm that makes it easy to see why women flock to him, even though he can be crass.

Considering this came out in the 1970s, I was surprised at how explicit parts of this were. The steamy scenes are all on-page and very detailed and the OW in this book has some, um, very icky taboos. Not only that, but she's been with father and son. Yuck. It doesn't appear to have been rewritten for the sensibilities of the 21st century audience and I'm actually very happy about that because SEIZED BY LOVE ended up being everything I love in these old-timey romance novels: beautiful writing, rich history, passionate and flawed characters, love-hate relationships, and an incredible story.

I've never read anything by Susan Johnson before but now I want to read everything she's ever written!