The Flame and the Blade by Meredith Hart 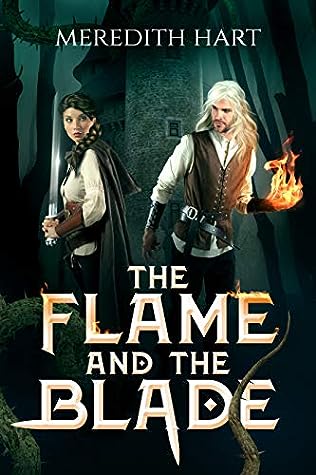 I snagged this while it was a freebie in the Kindle Store because the guy on the cover looked like the Witcher, whereupon I basically forgot about it until my friends Karen and Maraya agreed to a buddy read of the book. THE FLAME AND THE BLADE is an incredibly fun read. It's one of those books that straddles the genres of fantasy and romance, with enough elements of both that it's hard to classify, and it's reminiscent of fantasy greats with beta heroes and strong female heroines, like Mistborn or The Witcher.

The heroine, Lyria, was a leader of the Adventurer's guild, beloved by her crew and on the track to success, but when she finds out her lover (and superior) is cheating on her, she abandons her men to return to her family's guild, the Guards. That's how she meets the hero, a wild mage named Vethe, who is descended from the bad guy who once tried (and failed) to take over the world. His family live in a rotting castle in the middle of the woods, and they still long for the Glory Days That Almost Were, which is why they've hired a guard for an escort mission to take Vethe into the Demon Forest to look for the hidden marriage contract that will assure their return to power.

This was such a fun read. Vethe is a fun, rakish hero who uses his magic creatively (wink, wink) and Lyria is a brooding warrior nursing old wounds. They're fun apart but even more fun together, and I thought the steamy scenes between them (when they FINALLY happen) were really well done. This is definitely a traveler's journey sort of story, though, which won't appeal to everyone. A huge chunk of them is about being lost in the forest, fighting demons and sexual tension with equally mixed success. The story ends without an HEA or an HFN because there is still much to be explored between them, although there isn't a cliffhanger. All conflict, save for the question of romantic entanglement, is resolved for now.

I've said in previous reviews that you don't need to be original if you're a good storyteller and you can take the usual stock tropes and make them your own with solid characters and good plot twists, and that is definitely the case with THE FLAME AND THE BLADE. It's reminiscent of half a dozen stories, but manages to stand on its own two booted feet because of the way it spins out the tale of Vethe and Lyria. And honestly, one of the best parts of the story is when Lyria goes to Vethe's family's gloomy, Gothic mansion and sees how utterly mad they all are. The atmosphere and the love of fantasy tropes just ooze from the pages of this book. You can tell that the author loves the genre and has a fondness for all of the cliches, which is why she's so good at turning them on their heads. Really well done.