Vein Of Love by R. Scarlett 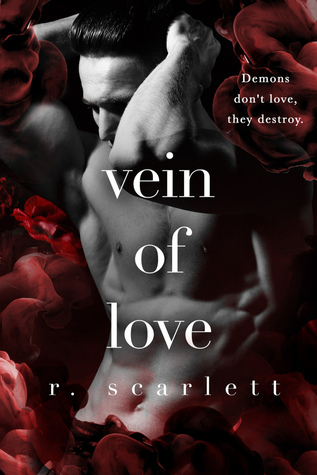 🦇 Read for the Unapologetic Romance Readers Halloween 2018 Reading Challenge for the category of: A romance with a demon 🦇

This is going to be one of those reviews where I share an unpopular opinion that is probably going to make people mad at me, but here we go. Spoiler: I didn't like the book. Isn't that crazy? You'd think I would, because it was supposed to be so dark and so sexy, and dark and sexy are, like, my bread and butter. Plus, it's based on an arranged marriage between two people who hate each other, which is basically my most favorite thing. So really, the fact that the author managed to take three of my favorite things and make me hate the book is, well... almost a talent. No, seriously. That's like making me hate bubble tea or avocados or romance novels. Good for you. Gold star.

Here's the thing, this is a book written for people who like fanfiction-style writing. The heroine, Molly, is a Mary Sue of the highest caliber. She has super special eyes, is a half-demon, and the most important thing about her is that she's a gold star virgin who has managed to capture the eye of the demon prince, Tensley (which kind of sounds like the name of one of those electronica/indie artists the teens are listening to. Halsey and Tensley, coming to an Outside Lands festival near you). The writing reminded me, actually, of this other really bad demon fic I read back in the early 2000s when Quizilla was the Wattpad of the day (I'm old, yo). Did I read it? Hell yes. But even fourteen year old me acknowledged that it was trash.

I skimmed pretty heavily, so I honestly don't really have the faintest idea what this book is about beyond the whole prophesized to become a demon wife thing, and the fact that there was an oral sex scene at 69% of the Kindle edition (if that was intentional, that actually makes me like you a little more, R. Scarlett - it shows you have a sense of humor, which I always appreciate). I don't think there was much more beyond that, TBH, apart from the many references to designer shoes and the fact that demons are born with half a heart and will be destroyed if they grow a whole one by falling in love, which I think is supposed to add a whole new level of angst to the story, but actually made me think of another forbidden love story between demons that I like much better, i.e. Little Nicky.

I guess this was a "thing" on Wattpad, and I honestly can't see why. I'm not saying that to be mean. I've read a lot of fated-to-be-mated books, and this one ticks all the usual boxes. It's unfortunate, because I was actually really hoping to like this one. Oh, well. ¯\_(ツ)_/¯