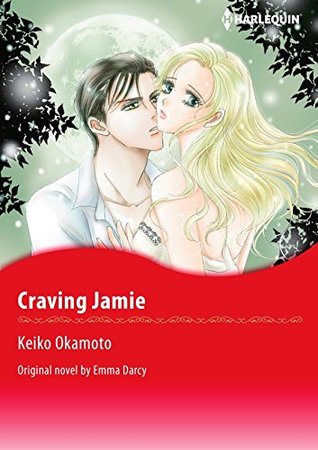 Another Harlequin manga! And it's got such a cheesy name, too. The author had 99 ideas, but a title ain't one. With a title like CRAVING JAMIE, my expectations for this book were not high - but it was actually really good, and with much better art than that equally cheesy cover would have you believe. Also, side note: it's not about werewolves.

Beth and Jamie grew up on neighboring farms. Jamie's grandfather was tight-fisted and abusive, overworking and underfeeding him, putting him into school only as an afterthought. Beth's family felt sorry for him and gave him food and Beth herself helped him at school and even taught him how to read. After winning him over, the two of them became inseparable until the day Beth had to leave, vowing that they would one day reuinite.

Now Beth is a children's book author and Jamie is a rich businessman. They meet again at an art gallery. Beth initially wanted to reconnect with her childhood friend, but Jamie, who goes by Jim now, thinks she's a gold-digger and ends up taking her home to sleep with. A heart-broken Beth reveals who she is on the way out the door, bringing back a cartload of angst-ridden memories as Jim struggles to rectify the innocent girl from his memories with the fully-grown woman who is constantly forcing him to go off script as he makes multiple mistaken assumptions.

A romance is nothing without angst, and CRAVING JAMIE has some good damn angst. I love romance novels that have emphasis on family, and liked the role that Beth's aunt and father had in the storyline. I also thought their childhood relationship was portrayed well and gave a good reason why Beth would try to seek him out and persist, despite his newfound jerk-status, as she tried to find the boy he was inside the man he became. The ending was really great too, although I won't lie: so were the sex scenes. Seems like I was right about the red covers being spicier.

Another good addition to the Harlequin comics line.