Enemies at the Altar by Rieko Hamada 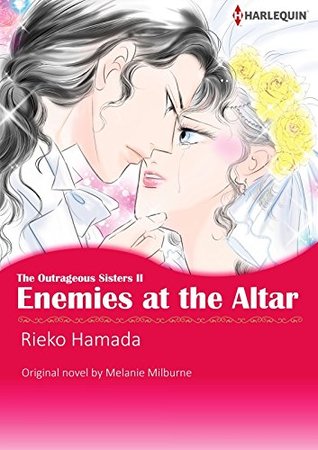 Man, what is it with me and marriage of convenience romance novels? I just can't seem to stay away, especially with a title like ENEMIES AT THE ALTAR, which hints at yet another one of my all-time favorite romance novel tropes: enemies to lovers. I wanted to like this book a lot, really I did, but it just had so much working against it. I can't even say that I particularly liked the art style, either, which features really round, almost bubble-shaped heads and eyes and super derpy expressions. I actually went through my Harlequin manga collection, because it reminded me of another book I read where the cover is literally so derp, called RED-HOT LOVER, and lo and behold, the cover artist is the same. Rieko Hamada, why??

Sienna's mother used to work for the Ferrante family as a maid, although she spent a lot of that time working on her back IF YOU KNOW WHAT I MEAN. Sienna actually found out about her mother's affair with the Ferrante patriarch from the son, Andreas, after she tried to put the moves on him. When his father caught them, Andreas got all high and mighty, like, "Unlike YOU, I don't doink the help." Shortly afterwards, Andreas's mother died, and Sienna's mother blamed herself, made a HUGE scene at the funeral, and then became an alcoholic. Nice.

Years go by, and Sienna gets roofied by a guy who then films themselves doing it and makes it a sex tape. Humiliated, Sienna flees to a museum where she meets a sympathetic old guy who invites her to marry him and become his beard so he can continue seeing his male lover. The old guy is rich and kind, but also apparently incredibly stupid, because somehow he forgot to write a will leaving Sienna anything for her sacrifice (and the lover, too, it sounds like), so all of his assets went to his greedy homophobic relatives, leaving nothing for Sienna, who is now poor. We meet her at the funeral for Guido Ferrante, where she meets Andreas again for the first time in years, and the two of them are horrified to find that they have both received the bulk of the Ferrante fortune with one condition: that they must get and stay married for at least six months. I believe that's what lawyers call "the douchebag clause." I call it, "fucking with people from beyond the grave."

Sienna pitches a major fit but then decides, "hmmm, money." Andreas thinks she's a major slutpants, but is also like, "hmmm, that ass." The two of them get together and hate themselves - and each other - for it, but if you think that stops them from making such inane decisions, pull up several seats, my friends, because you must be new here. Eventually, Sienna learns that he actually cared about her all along and was just hurt by his Daddy issues, and Andreas realizes that Sienna wasn't such a slutpants after all and clears her name from the sex case scandal by implicating her attacker of rape. There's time for one last flounce, of course, after a double wedding with Sienna's twin sister, but Andreas redeems himself with a public accusation of Sienna's attacker and then boom, wedding #2, for realsies edition. They decide they love each other after being major garbage people. The end.

Oh man, this book was so lame. Derpy art aside, I just couldn't really get on board with either character. I don't like Poutypants heroes who act like jerks because of their Oedipal/Electra complexes, and Sienna was such a little twit. Her brash, obnoxious attitude reminded me of Celaena from that stupid THRONE OF GLASS series, which naturally made me want to deck her in the face. There's a difference between being strong and being a blowhard, and this character hasn't the faintest idea what that difference is. The dialogue is also very forced and artificial. I like how ridiculous and over-the-top this book was but in terms of art and story alike, it is lacking.