A Game of Vows by Harumi Benisako 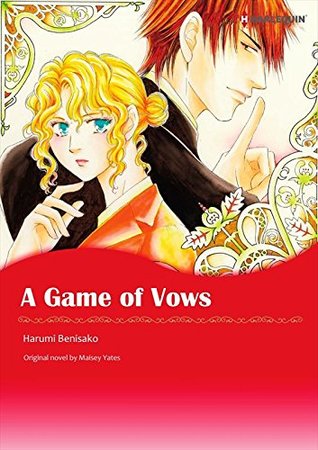 I'm so happy that you appear to have taken my Tweet to you to heart, in which I bemoaned the lack of discounted Kindle books of your manga line, and earnestly professed my intent to read more of these should they go on sale.

Since you have honored your side of the agreement, I have been sure to honor mine as well, and have been buying each of these puppies as soon as I see that $1.99-or-less price tag.

A GAME OF VOWS is based off a book of the same name by author Maisey Yates. I feel like I've read another adaptation of her work but can't remember what it was. This book was pretty good. It's one of those enemies-to-spouses books, which is apparently a pretty common theme in Harlequin novels. Who knew? Not me, but I kind of love it.

Hannah is on her way to be married when she is kidnapped by her ex-husband. Only since he never filed the divorce papers, she is actually about to become a bigamist. Whoops. She's also illegally changed her name and fraudulently crafted her reputation in order to go to college, and her ex-husband, Eduardo, tells her under no uncertain terms that unless she returns home with him as his wife, but also as his business partner, he will ruin her.

So she goes, because what choice does she have?

I thought this story was OK. Hannah was a bit of a con artist, but she also had a traumatic history. So did Eduardo, who suffered a major head injury that has caused him to suffer amnesia and debilitating migraines. I liked that his head injuries weren't miraculously cured by love, and it was clear that it was something he was going to have to deal with. All too often, romance novels buckle under the "healed by love" trope, which I find as problematic and insulting as it is harmful.

Hannah was not a nice person, but she had backbone and wasn't obnoxious. The dialogue and art were also good, although for some reason the author made their torsos ridiculously long and their shoulders very boxy. At one point, Eduardo is in a suit and he literally looks like a box with legs (vaguely reminiscent of those bodyguards in that artsy French cartoon, The Triplets of Belville (2003)). I've read several other manga Harlequin adaptations with similar plots this week, and A GAME OF VOWS was definitely one of the better ones. It won't be topping any of my favorites lists but it passed the time quite pleasantly and what can I say, but that I'm a sucker for HEAs.