The Widow by Anne Stuart 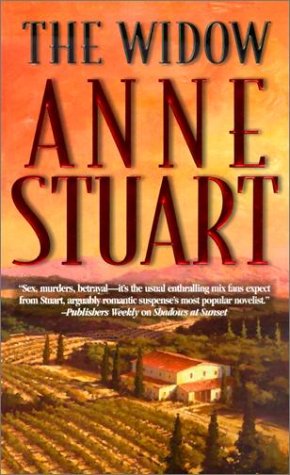 🦇 Read for the Unapologetic Romance Readers Halloween 2018 Reading Challenge for the category of: A romance involving murder 🦇

'Murder' probably isn't the first word that comes to mind when you think 'romance,' unless you're Ted Bundy, but there's an entire sub-genre of romance novels that focus on crime and mystery, called "romantic suspense." Since one of the books on my Halloween challenge for romance novels actually focuses specifically on murder, there were plenty of options to try and select from.

THE WIDOW is about our doormatty heroine, Charlie, who now owns her own restaurant in New York. Her ex-huband, Pompasse, is like fifty years her senior and still lives in Tuscany where he works as an artist and cavorts with adolescent girls, sometimes well before they turn eighteen. So nobody is really that sad when he kicks it, even though Charlie feels obligated to return to the estate and sort out his affairs.

When it turns out that Pompasse - who I kept reading as Pompous, because that's what he was - was probably murdered, again, nobody is that surprised. The big shocker is that some of his most famous paintings, all of them of Charlie, have gone missing. The hero in this book is an Australian true crime author who wants to write a sleazy biography of Pompous's family, so he creeps his way into the estate by pretending to be valuing the properties, and maybe get into Charlie's pants.

I did not really expect the murderer, but nor did I really care. Charlie is such a limp rag of a heroine. Maguire, the hero, was a jerk. Henry, Charlie's fiance, was a jerk. Gia was such a cardboard cutout of jealous OW that it was almost laughable. The servants were stereotypes, and the villain was your typical mad and vengeful trope - which, admittedly, is probably the most common reason for revenge-murders. But at the same time, I'd like it if the climax wasn't just a few badly-rendered flashes of lighting bolts shy of a 1950s pulp horror film.

Definitely one of my least favorite Anne Stuart books.