A Daring Proposition by Yoshiko Hanatsu 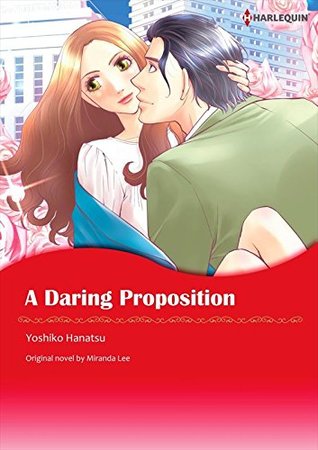 I don't think I can tell you how much I love these Harlequin romance adaptations. I love manga, I love romance. Whoever thought of combining the two was a genius. Whenever they go on sale, I buy them up on Amazon, and now that they've started showing up as ARCs, I can get even more of them. *insert evil laughter here* If you haven't gotten on the Harlequin/Mills & Boon comics train, buy yourself a ticket and hop aboard.

I usually rate these a little differently than I do typical romance novels. Story is still very important, but I also rate on how well I think they adapted the romance to the manga format, how good the art looks, and whether the art-to-text ratio flows easily or it feels either too bogged down for words or like I paid way too much money for a few line drawings with captions.

A DARING PROPOSITION sounded intriguing... but I should have read the summary more carefully because it's one of those "let's make a baby" romances and I can't stand those. Ugh. Having a child is a serious commitment and deciding to get pregnant because you think it will tie someone to you is selfish and cruel. /my two cents

Sam is Guy's secretary and has been in love with him for years. He is not only oblivious to this, he is also a hopeless womanizer who sleeps with tons of blonde women that Sam likes to slut shame while secretly feeling envious of. He always stops smoking before he starts dating, so she watches his cigarette habit (where is this story set, that they are allowed to smoke in an office?) with as much or more interest as a doctor.

One day Guy's father ends up in the hospital which makes Guy aware of his own mortal coil. He decides he needs to have a child, because when his father is gone, he will have no family. So he asks his secretary to go find him a baby surrogate, to which Sam stands up and says I VOLUNTEER AS TRIBUTE like this is The Baby Games and she's way too eager to service the Capitol in any way.

Guy is initially not keen on this, but when he overhears and misunderstands a phone call Sam is having with her aunt, he thinks that she's easier than he previously believed and goes to town - only to regret it afterwards (because he thinks she's seeing someone else on the side). Too bad that they already did the dirty deed, and now things are ~super awkward~ around the office. Especially when Sam, not knowing why he brushed off their baby bargain, decides to wear a skin-tight dress to seduce him back and their other coworker starts making super creepy comments to her that are basically a sexual harassment suit waiting to happen (like all of this baby side hustler business wasn't enough).

The childhood friend sort of presents a love triangle, but it's so obvious that isn't going to happen that it almost isn't even worth mentioning. The childhood friend, Norman, has just one purpose: to serve as a misunderstanding that becomes a catalyst for triggering Guy "Mommy Issues" McBusinessman into realizing that he has feelings in places beside his junk. Cue heartwarming music and marriage proposal upon realizing that Sam is pregnant.

Maybe the book is better? I don't know. This story felt way more dated than some of the other adaptations I've read and I'm wondering now if that's because it was an older book. Most offices don't let you smoke in them, and the sorts of creepy comments and hankypanky shenanigans going on in this particular office kind of make this feel like an especially gross episode of Mad Men.