The Italian Surgeon by Yoko Inoue 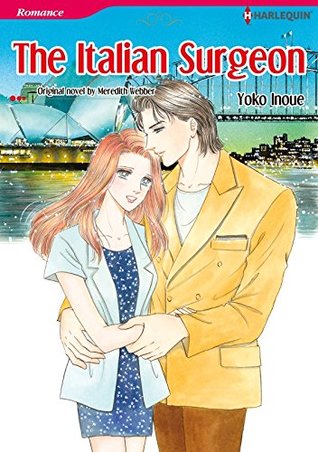 THE ITALIAN SURGEON is based off a 2005 Mills & Boon publication of the same name. The ratings for the original novel are pretty low, 2.86 as of this posting, and it doesn't have very many reviews. I was a bit surprised, to be honest, since these adaptations usually seem to be of authors with a cult following, like Penny Jordan or Sara Craven, so it was a bit odd to see a relative unknown like Meredith Webber in the mix.

The plot of the manga is pretty basic. Rachel is a talented nurse who works in a pediatric cardiology hospital for personal reasons, because in the romance novel/soap opera universe, the only reason you ever become a medical practitioner is because someone close to you died and you must use it as a form of catharsis to release your inner demons. Her life is pretty satisfying, especially since she has made it so she never has to interact with the teary-eyed parents who she finds way too triggering. Then one day, an Italian surgeon comes to the ward and he thinks she's pretty hot, so faster than you can say hostile work environment, he's all up in her business, pick-up style.

Here's my two cents about "alpha" type dudes in romance: you can't have your alpha cake and eat it too. Authors want to take these aggressively forward men and make them nice guys, but it usually doesn't work. Either you write an alpha dude and you stick to that formula, even if it means he behaves in ways some might find unpalatable, or you write a straight-up nice guy who is respectful. If you try to combine the two, you get some smarmy, icky dude you imagine calling himself a nice guy, even as he's texting his ex-girlfriend to tell her what a slut she is for not deigning to sleep with him.

I feel like the author really did try to make Dr. Luca so dreamy, and it has a bit of a Grey's Anatomy vibe (another show that sometimes toed the skeevy line with love interests). I mean, making the doctor a pediatrician who saves babies is like having a veterinarian carry around a bouquet of small, mewing kittens he's just saved from the side of the road. He's a hero who likes small, cute things. That's only slightly less desperate than taping a sign to his back that says PLEASE LIKE ME. And I wanted to, but his skeeviness in the beginning was just a bit much. I was unconvinced.

THE ITALIAN SURGEON also had some wtf moments, as I feel like it was very heavy-handed and emotionally manipulative regarding the difficult decisions parents have to make when faced with a terminally ill child who might not survive. I didn't like that it painted the people who elect not to perform these surgeries as basically bad people who are giving up on their kids. I don't think not wanting to force your child to live a life of constant surgeries is selfish or giving up. If someone is not equipped to deal with all of the gravity and complications that come with taking care of someone who is sick, or even just unable to afford it, then I think it's understandable to not want to go ahead with such a procedure. It made me wonder if maybe this is some thinly-veiled "pro-life" propaganda wrapped up in a pink romance novel bow. I've seen moral grandstanding in romance novels before and I always find it quite jarring and distasteful.

There's also a weird terrorist plot thrown into the last act, which feels slow because the romantic tension has already essentially resolved itself, so this felt like padding to flesh out the last quarter of the book. Some Middle Eastern family with political ties comes to the hospital to have their child operated on and their opponents phone in a threat to blow up the hospital. Then Dr. Luca has to flee to the Middle East to perform the surgery safely(?), and Rachel bravely follows him, despite the danger. *eye roll* I thought this was lame, and it felt highly unnecessary and irrelevant.

I loved the art, but the story fell flat for me. I think I'm done with Meredith Webber. If you're curious, though, the novel edition of this manga is available for purchase in the Kindle store for $1.99.

P.S. The heroine has a flamboyantly gay best friend named Curt, and yes; he is a walking stereotype.