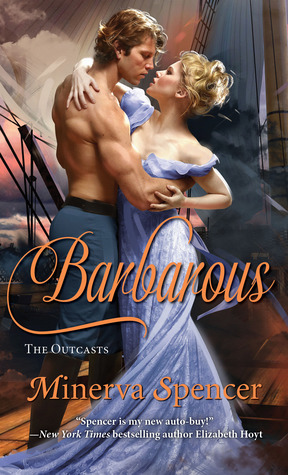 Disclaimer: I am friends with the author.

When I was offered an ARC of this book, it was a no brainer. I loved the first book in the series, DANGEROUS, and couldn't wait to read more of these characters. Mia was such a strong character, and I loved how the author flouted some of the harem romance tropes even as she worked to modernize it for the tastes of a contemporary audience who might not be too chill with polygamy and rape.

BARBAROUS also follows in DANGEROUS'S footsteps, in that it is at heart a pirate romance (see cover) that also is a bit of a throwback to 80s bodice ripper culture (again, see cover). I was so excited to read this book but sadly, the most appealing thing about this book for me was the cover.

Here's the thing, this book takes place before the events of DANGEROUS, so when Mia initially makes a cameo I was really confused because she had just returned to England and was acting really strangely (totally OOC). So what this means in the canon of this world is that nothing that happened in book one has happened yet, which technically makes this book more of a standalone prequel. Which, okay, that's weird, but whatever floats your boat.

Second, whereas the first book's romance was one of the most compelling aspects of the book for me, Hugh and Daphne have zero chemistry. I didn't ship them at all, didn't really see what they saw in each other beyond the generic "here's a good-looking person I can do the hanky-panky with" sense. Also, the sex scenes in here were, um... bad. "Wet glove"? Um, what is this? Bertrice Small?

Third, even though I liked that the heroine was previously married and had two children, it's worth noting that her children (twin boys) are a product of rape and she was married to a much older man to cover up the scandal. And the main conflict in this book comes from her rapist continuing to taunt and blackmail her. That's much less fun and exciting than the conflict in the first book, which involved a lost son, and a political coup with a royal family. I felt like Daphne's rape was touched upon in a very superficial way and thought it was odd how little she appeared to be affected by it.

Fourth, it was boring. Unfortunately. I skimmed a lot.

I'm still excited for the third book, SCANDALOUS, which features another pirate, a flamboyant Frenchman named Bouchard. (Seriously amped for the cover reveal on that one.) However, my expectations have been tempered somewhat, because this was a real nosedive from the first book.