Snowfire by Phyllis A. Whitney 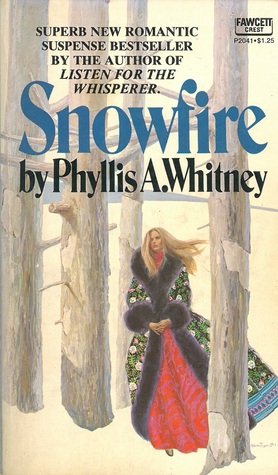 🦇 Read for the Unapologetic Romance Readers Halloween 2018 Reading Challenge for the category of: A romantic suspense romance 🦇

Reading a Phyllis Whitney novel after a Victoria Holt has officially cemented Ms. Whitney as my new favorite gothic romance author. Many gothic romance authors wrote historical and "contemporary" gothic novels, but the "contemporary" ones were often horrendously dated and bad, because they were written in the same overly wordy and prudishly old-fashioned style, which ended up feeling jarring and anachronistic. Here, with SNOWFIRE, Whitney managed to capture the claustrophobic and smothering atmosphere of a crumbling manor home on the moors, even though it's set in a swanky modern ski lodge. How does she do it? With atmosphere, crafty wordsmithing, and a plucky heroine reminiscent of Nancy Drew who is determined to do what is right, even if it means sacrificing her own beliefs.

The heroine is named Linda and she has come to the Graystones, a cozy ski lodge, not for skiing but to exonerate her brother, Stuart. The Graystones are owned by a man named Julian McCabe, an ex-champion skiier. His wife, Margot McCabe, also used to love to ski, but an accident left her in a wheelchair and she was never quite the same afterwards. When she ended up being pushed off the ramp on her balcony by an unknown assailant, Stuart, who was studying skiing under Julian and his sinister groundsman, Emory, was blamed. There are too many holes in the story given, however, so Linda manages to secure a position as a hostess of the lodge while also attempting to ingratiate herself into the McCabe family to find out more information about who might have wanted to kill Margot - and why.

One of the things I love about Whitney's works is that she is so good at writing emotional scenes. A lot of gothic romances seem watered down and dreary, but that has never been the case for me when reading a Phyllis A. Whitney book. The McCabe family is emotionally devastated over Margot's death and features a wide array of characters that are eccentric and suspicious. There's Julian, of course, who might have wanted his wife dead because of the hindrance she proved. There's Julian's sister, Shan, who is a flower child that carries spells in her back pocket and believes that the family cat is a reincarnation of Margot (creepy). And then there's Adria, the daughter of Margot and Julian, who might also have reason to kill Margot, and seems to be seriously emotionally disturbed.

I think one of the reasons I love these gothic novels so much is that they remind me of the middle grade Point Horror novellas I devoured by the dozens in middle school. This one in particular made me think of that old R.L. Stine novella, SKI WEEKEND. They're a little dated but in a way that feels more nostalgic than tone-deaf, and I recommend them to anyone who used to read all those trashy middle grade horror novels and then grew up craving more. :)