The Shivering Sands by Victoria Holt 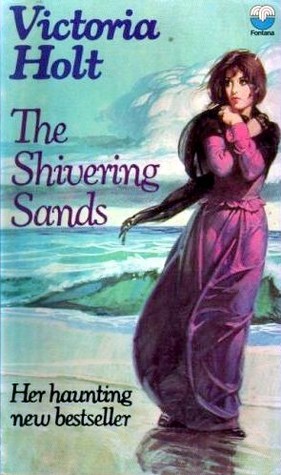 🦇 Read for the Unapologetic Romance Readers Halloween 2018 Reading Challenge for the category of: A romance written by an author who is dead 🦇

As if I needed an excuse to read more gothic romances... well, I do, which is why I'm taking part in a Halloween Reading Challenge designed to celebrate all things paranormal, dark, and spooky in my favorite genre - romance.

Victoria Holt, who died in 1993, was one of the obvious go-to choices for the "author who is dead" category. Not only was she exceptionally prolific, she was also a writer in two of my favorite vintage romance subgenres: pulpy gothics and pulpy historicals (the historicals were written under the penname, Jean Plaidy). The only problem with that is that being so prolific means that sometimes, quality takes a nosedive. There are Holt novels that I loved... and then there are Holt novels that left me shaking my head and going WHAT.

THE SHIVERING SANDS has a kind of silly title, which made me think of the Shifting Sand Lands level from Mario 64, and an equally silly premise. Our heroine, Caroline, was the only non-archeologist in her family. She loved music. One day, both her parents died tragically on their way to a dig, leaving her archeology-loving sister, Roma, and her both adult orphans to pave their own way. Roma continued doing her thing and became a prominent influence in her field, whereas Caroline decided to give up her passion to be supportive of her man, Pietro, whom she obviously still respects despite him being a grade-A jerk who says things like "you are worthy of me." He dies tragically too, and Caroline fiddlefarts around until Roma goes missing on a dig in Kent, after which Caroline decides to go play some Scooby Doo and figure out where her sister went.

Being the widow of a famous pianist (and a pianist of some repute herself) gives her easy entrance to the family who owns the lands where Roma was investigating. And this family - this family has one of the most confusing vipers' nest of a relationship tree that I have encountered in a while. She becomes piano teacher to three girls, one of whom is the vicar's daughter (Silvia). The other two girls, Allegra and Alice, have TWO different mothers. Alice is, I believe, the illegitimate child of the vicar's daughter's wife and the Stacy patriarch, Sir William. Allegra is the daughter of the black sheep son of Sir William, Napier, and a gypsy woman. This means that Alice, while being young enough to be Napier's daughter, is actually his step-sister(?) and Silvia's half-sister. There's this crazy old woman named Sybil who likes to paint creepy paintings, and I think she is Sir William's spinster sister, which would make her Alice's aunt, and Allegra's great-aunt. Napier, meanwhile, is engaged to Sir William's rich ward, Edith, which has put him back in his father's favor, because he has been ostracized for several years due to his possible murder of his younger brother and family golden child, Beau, which led his mother to commit suicide. BUT WAIT, there's more. As it turns out, Allegra is actually Beau's daughter, not Napier's, so she is his niece, and not his daughter. And Alice isn't Sir William's child at all, but the child of a criminal. If that doesn't give you a headache, I'm not sure what will. But man, I had a hell of a time trying to keep track of all these people.

THE SHIVERING SANDS is one of my least favorite Holt novels. It's so boring and slow to start that I skimmed for the first 150-pages or so. Then she employs this gross trope she's done in a couple of other books of hers that I can't stand. The heroine falls for a MARRIED man and Holt legitimizes this relationship by killing off the wife somehow so he's freed up for the heroine. The author did this in THE DEVIL ON HORSEBACK as well, which is another book of hers I wasn't crazy about. It was even more annoying here because the wife was killed in a series of 80s slasher movie-esque murder sprees, as well as the heroine's sister (which bummed me out - I was hoping she'd be returned safely). To the author's credit, I actually didn't guess who the killer was until the reveal, and the heroine ends up in some pretty serious trouble at the end. Too bad the previous 200 pages before the grand reveal didn't make me care more. Also, F that hero, who is just as judgy and pretentious as her ex-husband. He doesn't have any of the rugged gothic charm that some of Holt's other heroes have, and the excessive name-drops of Edward Rochester from Jane Eyre didn't win this book any favors, because all it did was remind me of other, better gothic romances that I could be reading instead.

I'm even more annoyed because usually I only spend $1.99 on an ebook, but since this is an author I usually like, I bit the bullet and spend $2.50 or whatever it was this ebook cost when it was on sale. So the fact that I did that and had this book blow so much was the straw on the camel's back, as far as I'm concerned. If you want to get into this author, I'd recommend starting with THE PRIDE OF THE PEACOCK, MENFREYA IN THE MORNING, or ON THE NIGHT OF THE SEVENTH MOON. Stay away from this one, though, unless you want to be annoyed and confused, like I was.