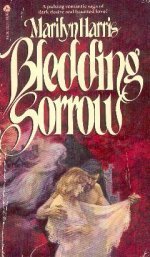 🦇 Read for the Unapologetic Romance Readers Halloween 2018 Reading Challenge for the category of: A romance set in/near a haunted house 🦇

Have you ever felt both simultaneously overwhelmed and underwhelmed by a book? Because that's kind of how I felt about this one, BLEDDING SORROW. It wasn't bad, but everyone was singing its praises to me about how it was such a mind-shattering Gothic novel that didn't care about happy endings, and reveled in its own twisted nature. That sounded like something I could totally get on board with, and I knew already that this author was fully capable of writing such dark and gloomy stuff that reading it could just about ruin your day, because Marilyn Harris also wrote THE EDEN PASSION, which has the dubious honor of being one of the more twisted and unpleasant "romance" novels I have ever read.

BLEDDING SORROW is only a romance in the most liberal sense of the word. There are two people who are in love in this book, but other than that, it doesn't really fit the genre for a wide variety of reasons. The focus of BLEDDING SORROW is definitely Gothic horror. The setting is an old Elizabethan house owned by the Bleddings, minor nobility that can be traced back centuries. The current owner, Geoffrey Bledding, is impoverished and must lease it out to the Historical Trust's various events. He and his staff are relegated to a distant wing of the house and are expected to make nice with the tourists and the students touring his home, which he does, playing host most convincingly.

But Geoffrey is not the gentlemanly lord that he seems. He's got his wife, Ann, locked away (an homage to the madwoman in the attic trope, perhaps), only he's the one who has caused her to be mad through many nights of druggings and rapes. Poor Ann's only solace are the small mercies of Caldy More, the servant, and the curious attentions of the handsome new coachman whose job it is to drive the coach and do menial tasks around the estate. Ironically, the first Geoffrey Bledding was also cuckolded by a coachman, and his reaction to this was, well, shall we say unreasonable.

Ghosts haunt BLEDDING SORROW, foreshadowing what will happen. All of the characters in the book seem to be locked into their paths, without question; this is a book that seems to believe in both fate, and the idea that history repeats itself. You'll suspect the ending, but it will probably still take you by surprise. I read a spoiler in one of the reviews on Goodreads and was still taken aback. Holy shit. What an unfair, depraved little book. But then, of course the woman who decided to have a narcissistic coward as the hero of her romance would choose to end her Gothic romance in this way.

Should you read it? Only if you like dark, depressing books and aren't easily offended by outmoded tropes and language. BLEDDING SORROW is not PC, and it doesn't pull back any punches when it comes to the mistreatment of its characters. I think it might have been a more effective book if the characters were more fully fleshed out. Ironically, the supporting character, Caldy More, has the most deep and thoughtful development over the book, whereas the three mains feel much more shallow and superficial - at least to me. That said, I did think it was interesting, and if you can manage to find a copy (sadly it's still out of print), it's worth a read for the WTFery alone.