The Ground She Walks Upon by Meagan McKinney 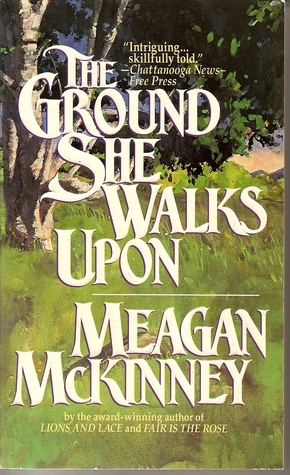 🦇 Read for the Unapologetic Romance Readers Halloween 2018 Reading Challenge for the category of: A romance with a Celtic theme (bonus points if it mentions Samhain) 🦇

I feel personally attacked by this book because it was so bad, and after liking the author's other book, LIONS AND LACE, so much, I felt like she had done me - and her other fans - dirty by publishing this... this dreck. THE GROUND SHE WALKS UPON is real bottom-of-the-barrel historical romance, with enough cheese to start up its own artisinal shop in downtown Berkeley. Seriously, wtf was going on with this author when she published this book? How can you go from LIONS AND LACE to this?

I picked this book because I needed a Celtic themed romance for my Halloween challenge. This book, sadly, doesn't mention Samhain, but it does mention Beltane (the other major Celtic holiday), as well as the concept of a geis (also spelled geas), which is a sort of fateful pact that must be fulfilled, at the cost of grievous consequences.

Lord Trevellyan is an English/Irish lord who rules in Ireland at the time of the Protestant Ascendancy. At the start of the book he is nineteen, and told of a geis that is part of a curse put upon his family for basically taking the lands away from the Irish. If he does not marry the woman he is fated to be married to, who must come to him freely, then his lands will all fall into ruin. He is then led to a cabin with a beautiful woman lying on a bed - the woman is dead, but she has a baby. He is told, in no uncertain terms, that this is his future wife, which reminded me uncomfortably of that SNL skit, Meet Your Second Wife. Or that imprinting scene from BREAKING DAWN.

Nineteen-years-ish later, Lord Trevellyan is now almost forty years old and the heroine, Ravenna, is a teenager. She's freshly back from school, where Trevellyan sent her after he started getting icky feelings about her when she was scarcely prepubescent, and the feelings are now much ickier. He's quite cruel to her because all of his previous marriages have failed in one horrendous way or another and he's been told by everyone around him that it's because of the geis, and he is a man who does not like having fate wrested from him, so naturally he decides to basically hold her captive in his house and threaten to murder all the men around her, while also putting the moves on her and treating her like a whore, and then at one point even going so far as to lock her in his dungeon so she won't run.

Ravenna is one of those irritatingly plucky heroines that seem to populate 90s bodice ripper romances. They stomp their dainty little feet and act hopelessly outraged, and seem bewildered by their traitorous bodies. This one is an author, and large chunks of the book contain excerpts from her self-published fantasy novel that, interestingly, mirrors her own life and slow "romance" with Niall Trevelyan. This is ironically the most realistic element of the book, in that like many self-published hobby authors, she does not have talent and her character is a self-insertion Sue.

I couldn't quite get over the "here is the baby you're going to f*ck" in 19 years beginning. I thought that was gross. I also didn't like Trevellyan. I thought he was weak. Obsessive heroes are usually my cup of tea, but he felt more like a creepy pervert, and he was so angry all the time, and also so insecure about the red herring love interest in this book. The Ascendancy was also not handled very well. I recently went to Ireland and learned about how the Crown seized land from Irish people and oppressed them systematically by preventing them from having titles, voting rights, or political power, and it was pretty sickening. I am totally fine with unpleasant acts of history being written about (I have, for example, read a controversial historical romance with a Stasi love interest), but they have to be realistic and they have to at least make a token effort at being respectful and doing the culture and the time they are writing about justice, and I did not really feel like that was the case here.

Yeah, no. I'm pretty bummed, and I bought several of this author's other books after liking LION AND LACE so much, so I'm hoping that this was the exception, and not L&L. :(