The Quicksilver Pool by Phyllis A. Whitney 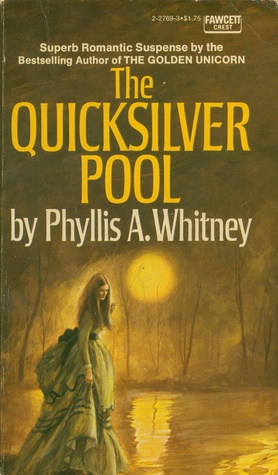 🦇 Read for the Unapologetic Romance Readers Halloween 2018 Reading Challenge for the category of: A gothic romance 🦇

Reading this book made me so, so happy because it's basically everything I ever wanted in a gothic novel. October is the perfect time of the year to be reading these too. When the leaves start turning and the weather cools down, there's nothing better than bundling up in your favorite blanket with a mug of tea and hunkering down with an old-timey mystery novel from the pre-Internet days.

I was suckered into buying THE QUICKSILVER POOL because the premise seemed to be promising a Daphne DuMaurier/REBECCA-inspired jaunt through the post-Civil War South. The heroine, Lora, was a nurse during the Civil War and ended up marrying wealthy Union soldier, Wade. When we meet her, he is just bringing her home to meet the fam, which includes his son from his previous marriage, Jemmy, and the looming and sinister matriarch, Mrs. Tyler.

Lora quickly becomes miserable because it's clear that her husband still carries a torch for his first wife, whose presence looms everywhere in the house. Her mother-in-law is awful, and when she's not making snide comments about how much better the first wife was, she's mocking Lora for being classless and inferior, and emotionally blackmailing everyone else in order to get her way. Other sinister characters include the sister of the first wife, a woman named Morgan who might have designs on Lora's husband, and a mysterious freed slave named Rebecca. REBECCA. Oh, yes, this was definitely REBECCA-inspired. That absolutely cinches it.

The last book I read by Phyllis Whitney was called THE MOONFLOWER and was also post-war, only that war in question was WWII. Many of the things I liked about THE QUICKSILVER POND were also present in THE MOONFLOWER - a rich and detailed setting, complex and sometimes unlikable characters who develop in interesting ways over the course of the story, and an emphasis on familial relationships and interactions that are strengthened through adversity. Another one of my favorite gothic romance authors is Victoria Holt, but many of her heroines are passive and lack agency, and she tends to fall into the trap of demonizing The Other Woman. Whitney, by contrast, is much more feminist in flavor - her heroines are independent and grow stronger as the books go on, and, even more shocking and welcome: she often has a surprising and interesting twist with the other women you meet in the story, making them into interesting and well-rounded characters.

Like THE MOONFLOWER, THE QUICKSILVER POND is slow to start, but then it really picks up the pace and is full of action. It's largely character-driven, but when those characters might be involved in covering up family secrets and murders, the pace quickly picks up. I couldn't put this book down and was desperate to find out what everyone was hiding. I wasn't disappointed. The ending was pretty great, and showed just how developed each of the characters was, in my opinion.

One caveat: the N word is used once, towards the end, but not in a positive or casual way - and the person who says it is not good. I understand some people will take issue with this, but in a post-Civil War society near the South where people are feeling angry and cheated over the outcome of the war, this felt pretty realistic to me. You may feel differently, and that is your right. /shrug

If you want to get in on the gothic-novel craze but are afraid they might put you to sleep with their harmless coziness, pick up this book. This was a great book. Definitely my fave of hers so far. You can expect to see more paranormal- and mystery-themed romances from me this month as I work through this Halloween-themed challenge. So far, it seems to me that I'm off to a pretty good start. (If you want to take a peek at what other books I'll be doing this month, you can view them here.)