The Masquerade by Brenda Joyce 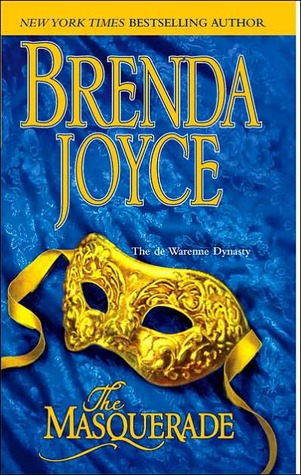 🦇 Read for the Unapologetic Romance Readers Halloween 2018 Reading Challenge for the category of: A romance with a masquerade/costume party 🦇

I picked up THE MASQUERADE for a category in this Halloween-themed romance challenge I'm doing. The category was for a masquerade or costume party-theme in a romance, and while combing despairingly through my Kindle, I thought the title of this book seemed promising. Luckily, it lives up to the title: the catalyst for what ultimately brings h and H together hinges on the events that happen during an All Hallows' Eve masquerade.

Elizabeth is one of the three daughters of an impoverished family of country nobility in Ireland. She has two sisters named Georgie and Anna. They are acquaintances with the de Warenne family, the local nobility, and go to their big parties twice a year. The heroine, Elizabeth, has a crush on the eldest de Warenne son, Tyrell, and has since they were both children and what she felt was major hero worship.

At a Halloween party many years later, when Elizabeth is all dressed up, she has a Princess Diaries moment when Tyrell finally sees that she's not just a chubby wallflower *eyeroll*; she is a woman of supple curves and sensual pleasures. So being the classy sort, he invites her to join him in an assignation behind a tree. Like I said, he's just bursting with class. Unfortunately, her pretty spoiled sister Anna ruins her costume and wants to swap, so Elizabeth ends up going home so Anna can stay.

Long story short: Anna sleeps with the man she KNOWS her sister has a crush on.

Her argument was that she's the one all men want and she was just so shocked that someone might not find her attractive that she threw herself at Tyrell until he decided to rub some of that - ahem - class he's just bursting with onto her.

And this being the regency period, when sexual education consisted of "save it for marriage or be ruined forever," they don't use protection and Anna gets pregnant. With Tyrell's son.

When Elizabeth finds out about this she's mad for all of two seconds before deciding to go to their rich aunt's house on the pretense of forging a letter expressing a wish that they nurse her back to health. Initially the aunt is one of those curmudgeonly prickly-pear types, but she eventually warms up to the girls and is shockingly sympathetic when she finds out what's really going on. The aunt, Eleanor, is actually one of my favorite characters in this book because she had a pretty solid sense of right and wrong and didn't go about on her merry way being a trash person to whomever she pleased.

So Anna and Elizabeth stay with Eleanor until Anna gives birth and the kid is basically Tyrell's spitting image. Elizabeth, knowing that they can ~never~ be together, is so entranced by this mini-Tyrell that she snatches him from her sister like it's the last cookie in a box of Oreos instead of a baby and announces that she's going to keep him as her own. Anna reluctantly protests, but she's engaged to someone else (and, you know, just slept with her sister's man-crush for funsies), and says, "Hey, great idea! I'm off to happiness now with my rich and handsome husband with NO consequences! Ta ta!" while Elizabeth does the job of raising mini-Tyrell, AKA Ned, with the singleminded possessive obsession you expect to see in The Hand That Rocks the Cradle and not, you know, a ROMANCE.

Eventually, Elizabeth is forced to return to her family and they are SCANDALIZED that their good girl decided to become a bad girl. The truth outs and when they find out who the father is, they march Elizabeth right up to the de Warennes' doorstep and demand satisfaction. Tyrell is furious because not only was he duped out of some hot, classy lovins on Halloween, the object of said lovins decided to sleep with someone else (he thinks) and try to pass the kid off as his. So he blackmails her into being his mistress by threatening to take her child away, and Elizabeth, being psychotically obsessed with Ned and Tyrell, agrees, and tries to pretend that she's a virgin by "accidentally" spilling wine all over the bed before they have sex, because she's so ~subtle~.

It doesn't work, and Tyrell is waaaay too creepily happy about being her first. A freshly-produced heir and a virgin bed partner? That's like insecure dudebro jackpot. Also she loves being in the kitchen and making him tasty treats. BUT WAIT, it gets better. Tyrell is planning on marrying this rich heiress named Blanche, while keeping Elizabeth in his house. UNDER THE SAME ROOF AS HIS WIFE. Because he's so ~classy~. When people (rightfully) call him out about this, he says that he's doing it for his son. Because *eyeroll* that's so believable. Elizabeth, on the other hand, claims that she's not jealous but spends so much time crying and spying on Tyrell's fiance, and acting all passive-aggressive while telling everyone who will listen, "I just want him to be happy!"

Eventually she leaves him for his own good after an encounter with Blanche's father that's pretty civil, except for the fact that he burns up her love note that she leaves before going. Blah blah blah, Georgie has a romance of her own, Anna is still happy and consequence free, Blanche was traumatized as a child and incapable of laughing or crying(??) which is why she doesn't want to get married, so she graciously steps aside and Elizabeth and Tyrell end up married with FIVE kids because class. Ned isn't mentioned at all in the epilogue. I guess he only matters when he's an entre to frustrated lusts and now that the heroine has her own children to be obsessed over, he's served his purpose. Because you know, classy. Also, poor Blanche - unable to laugh or cry? I wish she had a place in that epilogue. She's the nicest OW I ever seen and they swept her out of the narrative like dirt on their way to their ~classy~ happily ever after.

This is a real saga of total trash people, and that is not a phrase I throw around lightly. To be a trash person, you have to give a serious lack of f**ks about other people. Elizabeth gave no f**ks when she stole her sister's baby (luckily her sister didn't want the baby), and she gave no f**ks about how wantonly carousing around with a married-man-to-be might affect her semi-noble family and her remaining sister's prospects. Which it did. Badly. Anna was also a trash person, for sleeping with a man she knew her sister wanted and who wanted her back, and then for dumping her own flesh and blood on her sister to go start a new family with her shiny new husband. Tyrell was a trash person for thinking with his junk and then trying to pass that behavior off as real man of the house-type gallantry, and Georgie was a trash person for enabling her sisters' bad behavior.

What really annoyed me was Elizabeth is so obsessed and stupid and selfish, and yet we're constantly told about how kind-hearted and noble and gracious she is. And I'm like, "Seriously? I must not be hearing you correctly over the sounds of the seagulls circling around all these literal trash people." Oh, she gives all her money to poor people even though her family's impoverished. Really? Where is that money coming from? She doesn't have a job. You mean she's giving her poor family's money away to people on the street while ruining her sister's prospects and fucking a practically married man? Oh wow, so noble, wow, I can only aspire to that level of magnanimity.

The beginning of this book was OKAY because I'm a sucker for family dramas and I kept reminding myself that all of the characters were teenagers and teenagers are SUPPOSED to act selfishly and make bad decisions. But years went on and the characters continued to be stupid trash people and eventually I stopped caring about any of them. I do like the concept of this series, which is about a noble family that begins in Medieval times (and is allegedly a somewhat knockoff of Christine Monson's STORMFIRE), but like the blood of this family, the fire of the plot appears to have thinned as well over the years, degrading from bona fide 80s bodice ripper to present-day trash person drama.

I'm proud of myself for finding a book that fit the masquerade theme I needed but I'm seriously questioning the serious loss of brain cells I think I experienced while wading through this dreck.