The Darkest Night 1 by Earithen 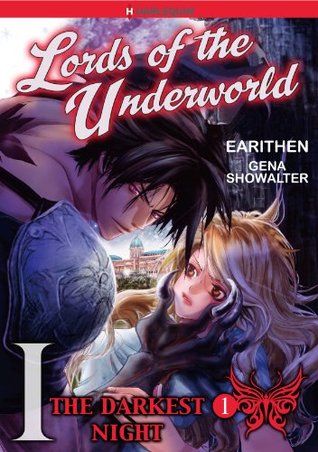 I've read a Harlequin adaptation by Earithen before and I didn't like it. The book in question was called THE BLACKMAIL MARRIAGE. It was a case of bad story, bad art, bad execution. When I saw LORDS OF THE UNDERWORLD on Amazon for 99-cents, my reaction was one of skepticism. I'd heard of Gena Showalter's series, but had written it off as being too cheesy. Plus, the adaptation was being done by Earithen.

So, after reading this book, it looks like I may have been wrong about both Earithen and Gena Showalter. The art in this is leagues better than the art in THE BLACKMAIL MARRIAGE and I enjoyed the cracktastic trashiness of the story so much that I'm seriously considering hunting down and reading the actual Lords of the Underworld novels now.

Ashlyn is a psychic at a paranormal institute in Budapest for work. She decides to miss her flight, however, when she hears two people talking about a tower where angels live. She goes to the tower to plead to the angels to take away her power and instead meets a large, sexy man with a sword who threatens her.

This girl, Ashlyn, not having a self-preservation bone in her body, hunts him down and clings to him, demanding that he take her with him. Because he's hot and he literally quiets the voices. Surprising himself, he does, and she sees that he has a whole bunch of other large, hot men who also reside with him. All of these men are thousands of years old, and figures from Greek mythology. Originally they were guardians of the gods, but after committing an act of treachery, they were punished by being forced to house demons of various types within their bodies (wrath, lust, violence, etc.).

They are being hunted by people called, appropriately enough, Hunters and are not convinced that Ashlyn isn't bait. So she's imprisoned in this castle with demon-possessed hunks, and the hero, Maddox, can't decide whether he wants to destroy her or have his way with her or both, because his demon is the demon of wanton violence, and once started, he won't stop until satisfied.

Writing all this out like this makes me realize how cheesy this story sounds. I'm already side-eying the mythology a bit. It's a little of Pandora's box, a little of the Four Horsemen, and a little of the Seven Deadly Sins, with a slapdash of Kresley Cole's Immortals After Dark. Both of these authors seem to treat their paranormal romances like a communal stew where you can just dump whatever into the pot and hope it tastes good. It honestly kind of reminds me of a Quizilla story I read back in the day called "Would an Angel, a Demon, or a Vampire Fall for You?" I believe the author of it named herself "icemakesyoumelt." It was a really bad story in which "you" were the name character and it was written in second person. I guess it just goes to show that no matter what age you are, or which medium you choose to consume your stories, we always fall for the same old trash.