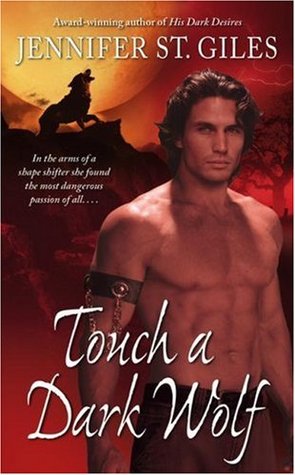 🦇 Read for the Unapologetic Romance Readers Halloween 2018 Reading Challenge for the category of: A romance about werewolves 🦇

It isn't often that a book successfully puts you off from the author's note in the beginning of the book, but TOUCH A DARK WOLF manages this with terrifying finesse when the author announces with a satisfaction you can literally feel emanating from the page: "the Chosen were the descendants of King Solomon and his seven hundred wives and three hundred concubines from many nationalities that scattered to the ends of the earth upon his death."

You see, apparently in the original, the heroine was a Mary Sue of the Bella Swan variety who had this magical blood that everyone wanted - especially supernatural baddies with teeth. Originally, they were called "Elan," but now they are called the "Chosen," and turning this blood-lustiness into a religious food fight between heaven and hell "adds fullness to the story and comes so much closer to the tale I wanted to tell."

Which I literally have no idea how to respond to...except by writing this review.

Erin Morgan is a nurse at a clinic called Sno-Med. Sno-Med gives free blood testings to people and seems like a great place...in the same way that the Bates Motel seems like a "family friendly" venue if you catch my drift. Erin realizes something off when a raging stereotype of a Middle Eastern despot comes in for a blood transfusion for his "cancer" and she finds four dead bodies in a room with full transfusion bags hanging over their exsanguinated corpses. Her boss, a raging stereotype of a designer-clad sleaze-bag named Cinatas, tries to attack her with a morphine needle but she escapes.

While on the run, she spends a lot of time in her car. And at one point, she opens her eyes to find a naked man on her car who, if the cover is any indication, apparently looks like Chris Sarandon. Chris Sarandon is an angelic type of being called a Blood Hunter who has been bitten by a demon ("Tsara") and therefore damned (i.e. turned into a vampiric werewolf). And since Erin is one of the Chosen, that means he craves her blood the way Edward craved a late-night Bella snack. But of course, that would be giving in to the forces of actual hell, which - I KID YOU NOT - is ruled by a creature named Heldon. THE RULER OF HELL IS NAMED HELDON.

Erin and her angel-werewolf-vampire decide to confront Cinatas and Sno-Med with the help of a Suspicious Police Officer, a good doctor (i.e. not an agent of Satan), and a druid. You see, Sno-Med is hosting an expo with free blood tests which is really an excuse to test people for that Blood of Solomon BS to turn them into demon chow. Oh, and the best part is, while Googling this, there's a BIG REVEAL that Cinatas is "Satanic" spelled backwards and "Sno-Med" is "Demons" spelled backwards, like it's SOME GIANT TWIST that they were evil all along. I couldn't help thinking of that "Nilbog! That's goblin spelled backwards!" line from Troll 2. And then I realized that this book is basically the romance novel equivalent of Troll 2, by which I mean it's so awful that it would be unwatchable if it weren't trying so earnestly hard, with such bad timing, that it's almost comedic.

P.S. If you find yourself feeling morbidly curious, it's currently free in the Kindle store.