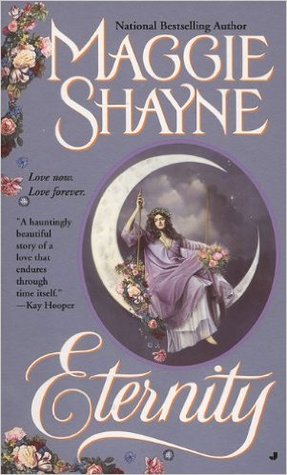 🦇 Read for the Unapologetic Romance Readers Halloween 2018 Reading Challenge for the category of: A romance with a witch 🦇

ETERNITY joins the cadre of bad paranormal romance I've read this year, alongside other greats such as TOUCH A DARK WOLF (a werewolf romance) and PRINCE OF THE NIGHT (a vampire romance). Fittingly, ETERNITY is about witches, and it's really unfortunate for this book that I happened to be watching Hocus Pocus around the same time because this book reads like someone watched Hocus Pocus, and completely missed the point.

Our heroine is a witch named Raven. Her mother is a healer in the 18th century, and after she fails to heal Raven's cousin, their relative decides to throw them under the bus by branding them as witches. They are rounded up by local witch hunter/heretic, Nathanial, to be hung. Nathanial's protege, Duncan, thinks that Raven is super-hot and is so horrified by the proceedings that he decides to abandon his master. Furious, Nathanial ignores his pleas and kills them both.

As it turns out, because Raven saved someone else's life in her past life, she gets to be an immortal witch. The only way she can be killed is if someone cuts out her heart, because that's how bad witches get to live forever: they live off the lives that they steal from someone else. And Nathanial, Witch Hunter Esq., is one of these bad witches who is not happy when he finds out that the dead bodies he planned to cut the hearts out of are both missing.

Raven goes to New England, has some run-ins with Native Americans, and settles in a small town where she becomes the object of lust for the local pilgrims who assume - guess what- since they are unable to control the activity of their privates, Raven must be a witch to fill them with such lusts. So the witch hunt begins anew, with Nathanial joining the fray yet again, and then Raven and a new witch friend flee into the woods to live with Native Americans, before going to...Salem. I think.I may be confusing the order of events, because it was all so ridiculous and I was rolling my eyes a lot.

Anyway, after Duncan dies trying to save Raven or whatever, they meet again and now he's a witch because he died trying to save her, only he's been re-adopted by Nathanial who has this weird, inexplained obsession with Duncan where he sees him as a son. Raven tries to get Duncan to love her but his attachment to the man who killed her mother is so traumatic, she doubts him. Nathanial fondles a statue of a raven while imagining cutting out Raven's heart. There's a final showdown. The bad guy wins, lol. Just kidding, this is a romance. Of course he dies, and everyone lives happily ever after. What did you think was going to happen, honestly?

I would just like to point out that the soulmate angle is this book's biggest weakness. Especially since their "meet-cute" is him thinking, "Wow, that girl is hot" while she's on the gallows, and they are basically eye-fucking while her mother is being executed. Gee, how romantic. I've never been a believer in love at first sight, and thought all of these characters suffered from a major case of TSTLitis. You know, it's funny because for last year's Halloween challenge, I read another witch romance set during the witch hunt times, called DEVIL'S MISTRESS, which also featured an obsessed witch hunter who hunted the heroine with fanaticism. It also opened with the death of the heroine's mother, and like this book, the hero is the man who helps save her from a similar fate.

I don't get why writing a good witch romance seems to be so difficult, but almost all of the ones I've encountered are painfully cheesy and weird. Let me know if you find a good one, because I haven't.