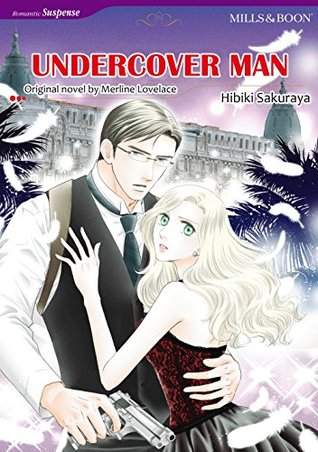 I was trying to figure out the color-coding on these romance manga and it looks like I might be right and purple means romantic-suspense. I've read a number of these manga at this point but UNDERCOVER MAN is my first romantic-suspense adaptation, and new is always exciting, even if it isn't always good. (And was this book good? Well...)

Paige and David are engaged but lately Paige has been noticing that David's been growing distant and it's made her want to call off the engagement. Then she gets kidnapped after being mistaken for another woman, and it comes out that her fiance, David, is actually a secret agent for a government agency and the woman she met by chance is his colleague.

Paige insists on helping, of course, because she's tired of David acting over-protective and treating her like a child. She argues that because they already believe her to be the other agent, it would be even more suspicious to introduce yet another woman by the same alias. Girl has a point. So David agrees to let her help... with some precautions. The stakes have never been higher, so by all means, let's set our watches to "amateur hour," and sit back and fold our arms. It's not like we were paid to do this mission or anything. Oh, wait.

This was... interesting? At first I liked how Paige called David out for his overbearing patriarchal BS, but it quickly got tiresome hearing her fight him at every opportunity - even over unimportant or ridiculous things. I'm all for girl power, but he is a seasoned agent and she is so not. He knows what he's doing, woman. Take his damn advice! I still can't believe he decided to throw his fiancee headfirst into the lion's den. That was so frustrating. And of course they make her bad at math. She's not just bad at math either, she gets "confused" by numbers, as her fiance declares condescendingly. I'm sure numeric dyslexia exists, but the way they went on about it in this book was super weird. Like, it actually becomes a plot point. Love cures her number dyslexia. Wut.

I also thought that the techy aspects of this book were ridiculous. The book really jumped the shark. It kind of reminded me of that really bad movie with Jackie Chan and Jennifer Love Hewitt, The Tuxedo. That's how ridiculous the science behind the espionage was. (If you haven't seen The Tuxedo, it is one of those bad movies that is so bad it is good, like Glitter, the Super Mario Bros. Movie, and Batman & Robin. I love all those movies and I'm pretty sure all of my friends think I have shitty taste, but I like to think that I have transcended quality cinema for the sheer value of camp and kitsch. But anyway, it didn't really work in this book and I was not wooed by the freaky-deaky DNA science.

Wouldn't really recommend this one.