The Darkest Night 2 by Earithen 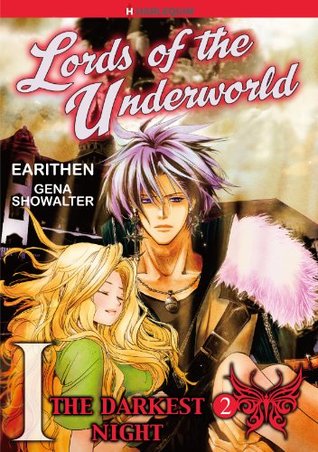 If there's one thing I love, it's Harlequin romance novels. Most of them are contemporary in nature so when I saw that Gena Showalter's Lords of the Underworld series had not only been adapted to manga but were also on sale, I bought books I and II. Apparently the actual novels are very erotic so it was hilarious to see how tame they were in these comic books, which did not contain that much more mature content than your typical shoujo manga for older girls (think Ceres: Celestial Legend or Black Bird). Even though the heroine was a Sue of the highest caliber, and the world-building was questionable at best, I devoured the first book. It was bad, but in a really fun way. Like Charmed.

I did not like the second book quite as much. The first book had a lot more action in it. This book was angstier, focusing more on the relationship between the hero and the heroine. Since they have a major case of insta-love, this was not that interesting to me. Especially since they're pledging to die for one another by the end of the book. I've already read the original Romeo and Juliet. Subsequent retellings of it pale by comparison.

That said, the art style is pretty okay and I liked the story enough that I'm kind of curious to see what the original novel (which I haven't read) is like with all the sex scenes and violence left in. The mangaka left an amusing after note, cautioning about the "passionate love scenes," and adding, "I almost want to tell girls younger than junior high kids to wait until they're adults to read this." Lol, why don't you leave that up to the parents, though? Seriously, what is the age demographic these Harlequin manga are targeting? Because in the U.S. at least, I don't think anyone quite knows and I always see these in the clearance sections of my local comic book stores (lucky for me, haha).