The Twelve-Month Mistress by Earithen 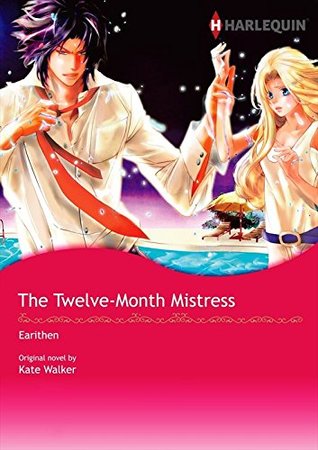 How do I keep winding up with Harlequin manga illustrated by Earithen? Something about her art style just rubs me the wrong way. Her characters' mouths are too pouty and her covers always look like someone went overly crazy with the Dodge Tool. That said, this is one of her better efforts, and it's currently on sale in the Kindle store, too. THE TWELVE-MONTH MISTRESS is an adaptation of a Harlequin novel by the same name by Kate Walker and it's, well... it's something.

Cassandra is in love with Joaquin but he's one of those snooty rich dudes with Mommy and Daddy issues: his father slept around, most of his siblings are bastards, and there was no love in his parents' arranged marriage as a result. So, instead of taking time to see a therapist or have some serious self-searching, Joaquin decides to date around and break up with his girlfriends after one year. Cassandra doesn't like this bargain but her feelings for him are so great that she reluctantly agrees, even as she's miserably counting down the days to the end.

On the last day of their relationship, Cassandra flees to Joaquin's half-brother's house, Ramon, who she is friends with. Joaquin finds her there and assumes that she's been cheating with Ramon. He offers to marry her to keep her away from his brother and she refuses. As he makes his rich boy pouty-pants flounce out of the apartment, he falls down the stairs and gets amnesia from hitting his head. Meanwhile, I'm sitting here, thinking, "What is this? The male equivalent of Bella Swan?" Cassandra feels guilty and decides to take care of him in absolution. Joaquin has forgotten the last month and has no knowledge of their breakup, but when he proposes marriage, this time in earnest, Cassandra refuses and once more, Joaquin accuses her of being an opportunistic slattern. When he finds out the truth, he feels terrible and finds Cassandra working a minimum wage job while heavily pregnant and proposes to her yet again. She agrees, and the pouty pantersons have their HEA.

THE TWELVE-MONTH MISTRESS was amusing but not really romantic. I thought Joaquin behaved like a child, and Cassandra also somehow always managed to make the worst possible decisions. If I want a couple to succeed, I either have to like them both or buy their chemistry, and with the characters in this book, neither of those was the case. I didn't like either character and didn't really understand what they saw in one another beyond looking really really ridiculously good-looking. However, YMMV. It's cheap right now, so it might be worth the experiment.