The Playboy's Proposition by Hiromi Ogata 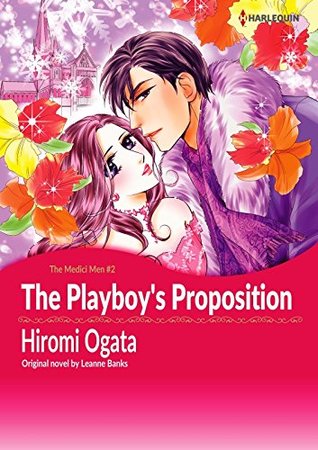 I bought this book because it was 99-cents in the Kindle store, and if you have a better reason than that to buy a book, I don't want to hear it. Look at that cover. Just look at it. Oh, yes. One look, and I knew I was in for a gourmet cheese-fest and I came prepared with crackers and wine.

The premise behind this one has worn a little thin. It's one of those poor girl/millionaire romances, which seem to comprise 99% of the Harlequin Presents line based on what I've read. Bella is a waitress who also helps out at her aunt's spa. She meets this guy at her bar and has a one-night stand with him after he drives her home after saving her from a sexually aggressive customer. Turns out he's the same millionaire who bought out her aunt's spa, which she could no longer afford after her cancer treatments. Bella has mixed feelings about that. So does Michael, who tells her that she can have her aunt's spa back if she agrees to sleep with him again. What a creep.

As far as creep millionaires go, Michael isn't that bad. Some of these Harlequin novels, the sex scenes border on rape. Here, it's consensual. His problem is that he blames himself for his father's death and younger brother's disappearance, which are actually the result of a freak accident. Lo and behold, Bella has similar soap opera origins, so she can understand him like no one ever has, and because he is a romance novel hero, this makes him angry and defensive because he is like the wind, and cannot be captured or tamed or understood or any of that nonsense! So of course, whenever he opens a window into his soul, he also has to slam a door.

I'm giving this a positive rating because the story was okay, the romance was okay, and I liked the art. For 99-cents you really have to peeve me off to give you a low rating, and this book did not do that. For the price, I liked what I got. It's kind of a sappy and unrealistic story, but it made me happy and I did not have buyer's remorse afterwards. If you're into the whole bargaining trope/millionaire trope, you'll probably really get into THE PLAYBOY'S PROPOSITION. Added bonus: no OWs/cheating.